Security forces and the Spanish tax agency have seized a fishing boat south of the Canary Islands carrying more than 2,900 kilos of cocaine, with a market value of €90 million. 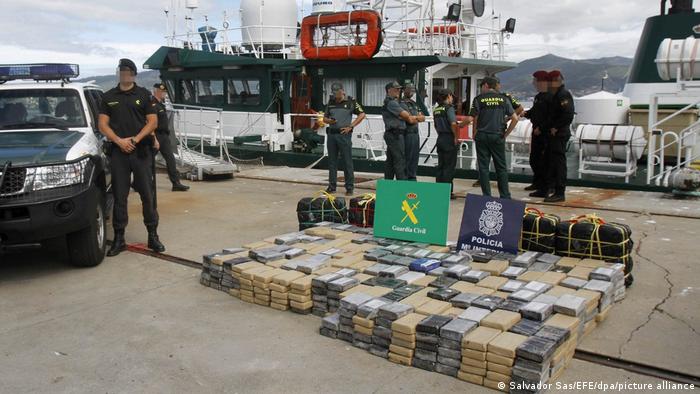 Spain is sometimes described as Europe's gateway for drugs

Nearly metric three tons of cocaine stowed on a fishing boat have been seized off the coast of the Canary Islands, Spain, officials said on Sunday.

The drugs were hidden in the boat's fuel tank and five crew members — four Turkish people and a Georgian — were detained during a procedure that was carried out on Wednesday, said a joint statement by the Spanish national police, national guard and the finance ministry.

The detainees, as well as the boat, the drugs and the police proceedings, will be handed over to the Spanish National Court.

The power of the drugs mafia - Cocaine and the Netherlands

Authorities were alerted that the "AKT 1" vessel could be carrying drugs by the Lisbon-based MAOC-N, an international agency set up to coordinate anti-drug trafficking action by several European Union member states.

The boat was halted some 300 nautical miles (over 550 kilometers) south of the Canaries and was subsequently towed to Las Palmas, the statement said.

Spain is the main gateway for drugs to enter Europe, with marijuana coming from North Africa and shipments of cocaine arriving from Latin America.

Juan Carlos Bonilla is wanted in the United States on drugs and weapons charges. Prosecutors say he used his position as police chief to facilitate the shipment of US-bound cocaine.

The two men had their life sentences reduced to 22 and 24 years. They have argued that the pair of plainclothes officers they grappled with in a Rome nightlife area did not identify themselves as police.

The Power of the Drugs Mafia - Cocaine and The Netherlands

Organized crime in The Netherlands is flourishing in tandem with the cocaine trade. A key witness is shot dead, along with his lawyer. A journalist is murdered in downtown Amsterdam.