Blazes continued into Saturday in central and northeastern Spain. In Catalonia, the regional government said firefighters had contained one fire, but were struggling to deal with a smaller one. 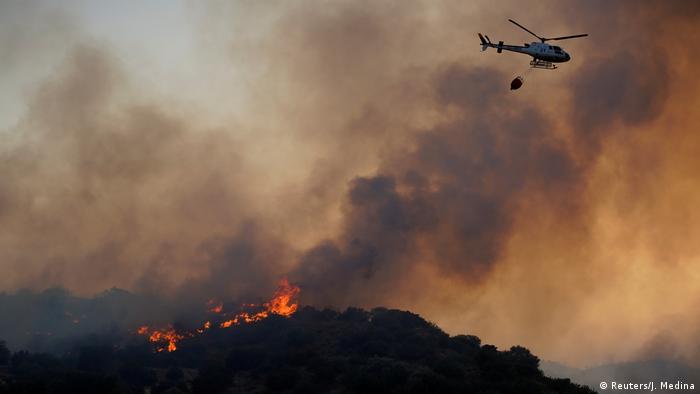 Several hundred soldiers and firefighters fought four fires in central Spain and the northeastern region of Catalonia, as Europe's heat wave continued into the weekend.

Authorities evacuated a small village near Madrid after a fire that began on Friday in the town of Almorox spread into the surrounding region. The blaze had already destroyed 2,000 hectares (4,900 acres) by Saturday afternoon.

Emergency services also battled a smaller fire in the Almorox region and evacuated 22 residents near the central city of Toledo.

In Catalonia, the regional government said they had contained a large fire, but were worried about a smaller one.

"Today, the weather conditions continue to be extreme and the next hours will be critical and decisive, not just for this fire, but also for the rest of the territory," it said.

France's weather agency said temperatures in some areas of the country would reach over 40 degrees Celsius (104 degrees Fahrenheit).

Extreme temperatures have been recorded in many areas of Western Europe in the past several days. On Friday, the southern village of Villevieille registered 45.1 degrees Celsius, the hottest temperature ever recorded in France.

The heat has been caused by an unusual weather pattern over Europe that channels extremely hot air from the Sahara desert northward, according to meteorologists. Temperatures are expected to fall from Sunday.