South Sudanese government forces and rebels have blamed each other for breaking a newly adopted ceasefire. It's not the first time peace efforts have failed to put a stop to the country's civil war. 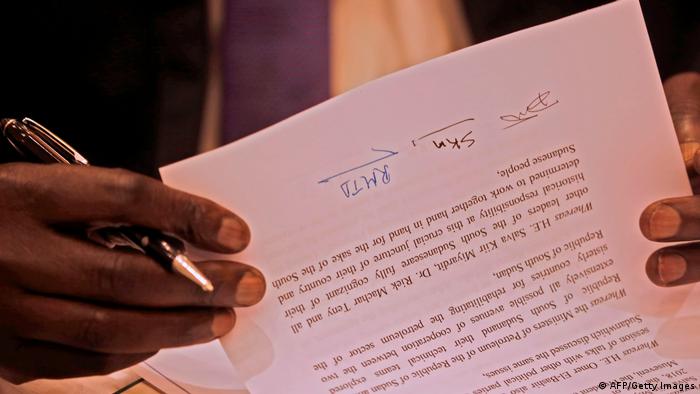 Rebels in South Sudan on Saturday said government troops had violated the country's new ceasefire just hours after it came into effect, while a government spokesman said the rebels attacked first.

The ceasefire was only signed by President Salva Kiir and Riek Machar, a former deputy, on Wednesday and came into force on Saturday. Multiple attempts to end the conflict and begin peace efforts have failed to end South Sudan's more than four years of civil war.

Gabriel said "the fight is still ongoing as I write" and called on the UN peacekeeping mission and ceasefire monitors to investigate, adding that the opposition reserves the right to self-defense.

The last ceasefire between the two warring groups in December 2017 was also violated within hours, which led the international community to threaten UN and regional sanctions against those blocking the path to peace.

Rival leaders agreed on a ceasefire in Khartoum on Wednesday and the opening of humanitarian corridors. Observers are skeptical that this latest deal will hold, unlike its predecessors. (28.06.2018)