As a parliamentary investigation into alleged election interference by a state agency limps along, some South Koreans are protesting for their country’s democracy to finally come to full maturity. 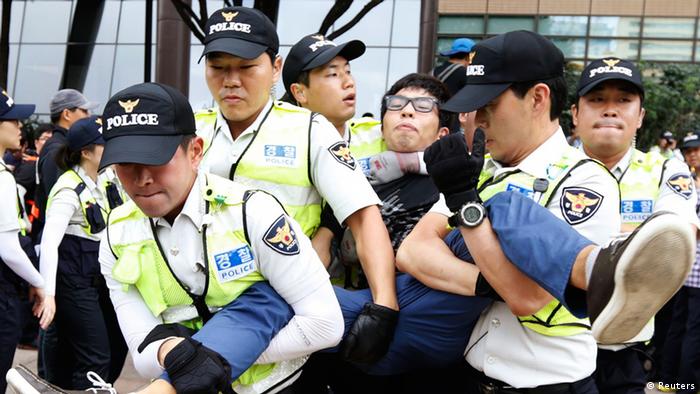 Citizens continue to gather in cities across South Korea to protest a scandal that began as a covert attempt by a state agency to sway public opinion ahead of an election, but has grown into a larger debate over the state of the country's democracy.

The scandal revolves around actions allegedly taken by the state intelligence agency, the National Intelligence Service (NIS), in the run-up to the presidential election in December of last year. The NIS is accused of having had its agents post thousands of comments in online message boards supporting ruling party candidate and eventual victor Park Geun-hye and disparaging her opponent, liberal candidate Moon Jae-in, as a shill for North Korea.

The protesters are seeking a thorough investigation of the scandal, a formal apology from President Park and for those responsible to be punished. Song Mi-rin, 23, a university student who came out to a protest in central Seoul on Friday, August 23, feels it's important for South Koreans to speak out on this issue: "The government did something wrong in this case, but they're trying to keep it quiet. Their silence won't solve anything," the student said.

An important issue is that the NIS is meant to be an explicitly non-political organization and its agents are constitutionally barred from any political involvement. 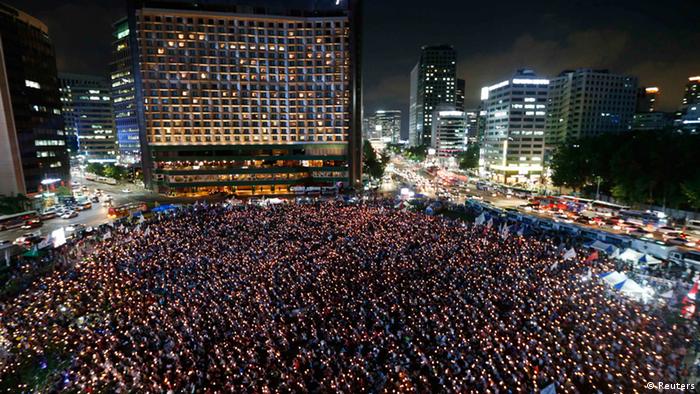 More than 100,000 people gathered for protests across the country

In June, Won Sei-hoon, who was NIS director at the time of the alleged infractions, was indicted on charges of orchestrating the online campaign, and former Seoul police commissioner Kim Yong-pan was accused of impeding early efforts to investigate the case. The two men are currently being questioned in parliament over possible involvement. At the beginning of the hearing, both men refused to take an oath swearing to tell the truth, and their uncooperative attitudes only fed the public's displeasure.

On August 15, Seoul police used a water cannon to disperse protesters who had rallied on National Liberation Day. Organizers estimated the crowd at 5,000; the police spoke of 3,500 demonstrators. Two days later, more than 100,000 people gathered for protests held simultaneously in several cities across the country.

After agreeing to reopen the joint Kaesong industrial complex and to talk on reuniting families separated by the war, North and South Korea seem to be improving ties. But experts warn that appearances can be deceptive. (22.08.2013)

Easing tensions on the Korean Peninsula

North and South Korea recently agreed to reopen a jointly operated industrial park that has been closed for months. Experts view this as a positive sign after a spring that saw the neighbors threatening war. (16.08.2013)

Experts say that citizens have been motivated not just by the alleged online comments prior to last year's presidential election, but by the fact that these kinds of abuses of power have taken place many times in South Korean politics, and no lasting solution to them has yet been found. From the 1960s through to the late 1980s, South Korea was ruled by military dictatorships. There were many cases of leaders using state agencies, such as the police or intelligence services, to maintain the regime's power through the suspension of constitutionally guaranteed freedoms and other anti-democratic measures.

The protesters are demanding a reform of the agency involved in the latest scandal. "There needs to be real reform of the NIS and election violations need to end," said Kim Yong-min, a former journalist and current adjunct professor at Hanyang University. He added that many people are gathering out of worry and anger. "They worry that scandals like this will keep happening again and again."

A hushed response from the President

Park was inaugurated as South Korean president in February this year. Since the alleged events took place before she was elected, Park has argued that she is not responsible, and that it is the duty of parliament, not the president, to get to the bottom of the scandal. She has also said the alleged online comments wouldn't have been enough to sway the election, meaning she saw no political benefit and that the legitimacy of her government was not in question. 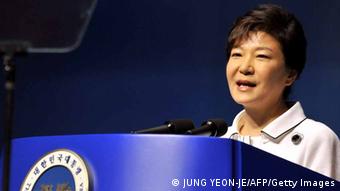 The ongoing crisis indicates that in light of South Korea's impressive development, its anti-democratic legacy has still not been eradicated. "Despite having been democratic for more than two decades, South Korean democracy is in some ways still not fully mature. Many citizens feel like Park herself and her government don't have a firm commitment to governing in a democratic way," said Kim Soo-jin, a professor of political science at Ewha Womans University in Seoul.

"These protests are growing because people don't feel like they can trust politicians to maintain democracy. They feel like they have to go out and protect it themselves."