Divers have removed the first bodies from a capsized South Korean ferry. Search efforts have been severely hampered by strong currents and poor visibility. 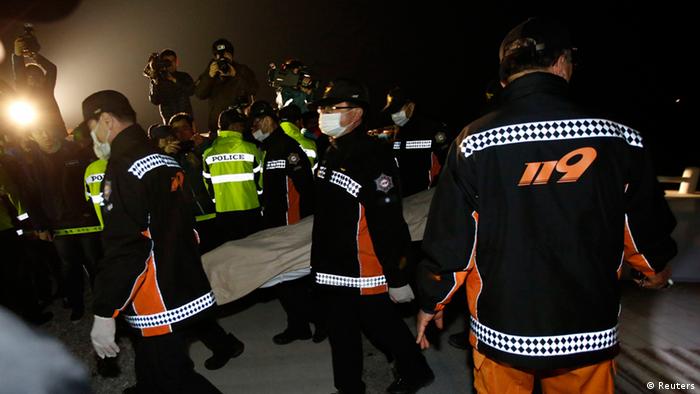 The confirmed death toll from the disaster rose to 36 on Saturday after divers gained access to the ferry for the first time.

"Divers broke through the window of a passenger cabin just before midnight and pulled out three bodies," a coast guard official told the news agency AFP late Saturday, saying the victims were wearing lifejackets.

The Sewol capsized Wednesday with 476 people onboard. It has been reported that the 6,800-ton ferry's passengers were instructed to remain on the vessel for up to 40 minutes after it capsized. Many relatives of the victims believe their loved ones may otherwise have had time to reach evacuation points.

With more than 265 passengers still missing, the death toll is expected to rise dramatically. Almost since the beginning, harsh weather conditions have hindered the rescue and recovery efforts

Many have blamed Captain Lee Joon-seok, who has been arrested on five charges, including negligence of duty and violation of maritime law. Two other crew members have also been taken into custody.

Lee has come under fire for leaving the ship with several other crew members ahead of passengers. Video aired by Yonhap showed Lee among the first people to reach the shore by rescue boat.

It has also emerged that Lee had handed the helm to his third officer and may have been off the bridge entirely when the ship capsized.

However, that appears to be standard practice on the 13.5-hour journey from the Korean mainland to the holiday island of Jeju. What many wondered, however, was why Lee had delayed the evacuation.

"At the time a rescue ship had not arrived," Lee said on Saturday. "There were also no fishing boats around for rescues, or other ships to help."

He added that "I thought that passengers would be swept away and fall into trouble if they evacuated thoughtlessly."

Relatives are clinging to hope their loved ones may still be alive inside the ship in pockets of air. However, no survivors have been found since Wednesday when 174 people were pulled alive from the freezing waters.

On Saturday, some relatives of the children missing in the sunken South Korean ferry offered DNA swabs to help identify the dead as the rescue turned into a mission to recover the vessel and the bodies of those on board.

Prosecutors will have 10 days to decide whether to indict the captain and crew, but can also request a 10-day extension from the court.

Officials are seeking an arrest warrant for the captain of the South Korean ferry that capsized Wednesday. Rescuers continue to battle poor weather conditions in their search for more than 260 missing passengers. (18.04.2014)