Following the mass shooting at an African American church, South Carolina's governor has called for the Confederate flag to be removed from the state's capitol grounds. The flag is regarded by many as a racist symbol. 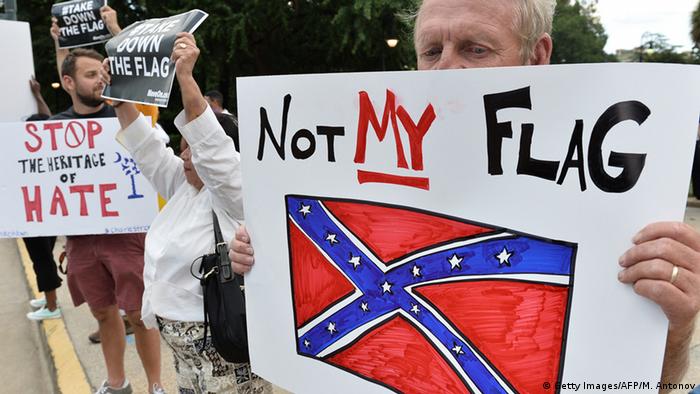 The blue, star-emblazoned cross set against at red background dates back to the time of slavery and was used by separatist southern states during the US Civil War from 1861 to 1865.

"It's time to move the flag from the capitol grounds," said Governor Nikki Haley on Monday.

"My hope is by removing a symbol that divides us, we can move forward as a state in harmony and honor the nine blessed souls who are now in heaven," the Republican added.

The governor's demand came less than a week after a mass shooting by an apparently racially-motivated gunman in the town of Charleston. Six women and three men were killed in the attack during a Bible study at Charleston's Emanuel African Methodist Episcopal Church meeting last Wednesday.

A website discovered on Saturday, which was apparently created by accused gunman Dylann Roof, includes a manifesto embracing white supremacy and photographs of the 21-year-old holding a Confederate flag and a handgun.

Supporting Haley on Monday was Charleston Mayor Joseph Riley, a Democrat, who said "the time has come for the Confederate battle flag to move from a public position in front of the state capitol to a place of history - the state museum, the Confederate museum."

"The Confederate battle flag years and years ago was appropriated as a symbol of hate," Riley said, arguing it was used by the Ku Klux Klan and others opposed to "equality among the races."

Over the weekend, several thousand protesters gathered at South Carolina's legislative building in the state capital Columbia, also demanding the battle flag be taken down.

As of Monday, a petition on the liberal website MoveOn.org demanding the removal of "all Confederate flags from government places" had garnered more than half a million signatures since the shooting.

Despite its links to slavery and racial hate, others have rebuked the protests and Governor Haley's demand, however, describing it instead as a symbol of the heritage and a way to honor their ancestors' sacrifices in the four-year war.

South Carolina governor has called for the execution of Dylann Roof, charged with nine murders at a black church in Charleston. The Department of Justice is investigating if the shooting falls under 'domestic terrorism.' (20.06.2015)

Family members of the nine victims shot dead at a historic black South Carolina church in the US have "forgiven" the only suspect, Dylann Roof. The shooting is being investigated as "an act of domestic terrorism." (19.06.2015)