The heads of Brazil, Chile, Argentina, and other Latin American states have created a new regional bloc, Prosur. It will replace Unasur, which was founded by late Hugo Chavez in a bid to limit US influence. 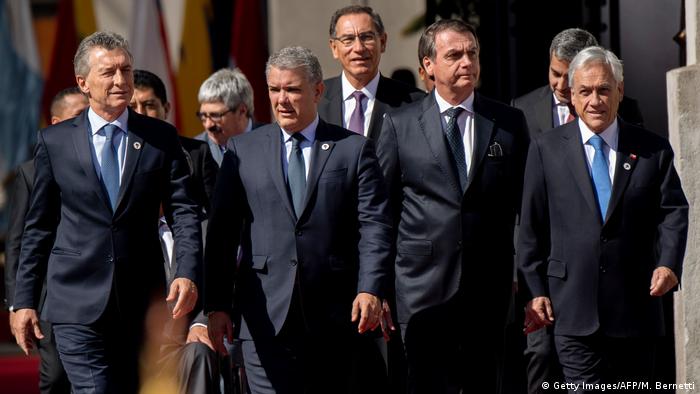 Seven right-wing presidents of South American nations gathered in Chile's capital Santiago on Friday to announce a new political association dubbed Forum for the Progress of South America, or Prosur.

The bloc would function "without ideology and bureaucracy, but with a total commitment to freedom, democracy and human rights," Chilean President Sebastian Pinera said.

Prosur includes Brazil, Argentina, Chile, Paraguay, Colombia, Ecuador, Peru and Guyana. Leftist governments in Bolivia and Uruguay sent representatives to the Santiago meeting, but did not join the bloc.

The alliance would allow the states to discuss infrastructure, energy, security, health, defense, crime, and response to natural disasters.

"Here, the countries of South America can exchange ideas, work together, make their voices heard and together achieve more freedom, integration and development," Pinera said.

Prosur would serve an alternative to the now-defunct Unasur, which had been founded in 2008. At the time, most countries in South America were led by left-leaning governments.

Venezuela' Hugo Chavez and Brazil's Luiz Inacio Lula da Silva spearheaded the international alliance which was aimed to counter US influence in the region. A total of 12 nations joined the leftist bloc. However, Unasur fell apart following Chavez' death and the escalating crisis in Venezuela, with the bloc failing to take action. Eventually, most of its member either suspended their membership or opted to leave all together.

Representatives of Nicolas Maduro's administration in Venezuela were not invited to the meeting in Santiago. One of the essential conditions for entering the bloc is "the full validity of democracy," which would exclude the troubled and politically divided country.