Somalia security forces have fought armed gunmen to end a siege at a hotel in Mogadishu. It is unclear at the moment whether there are casualties. 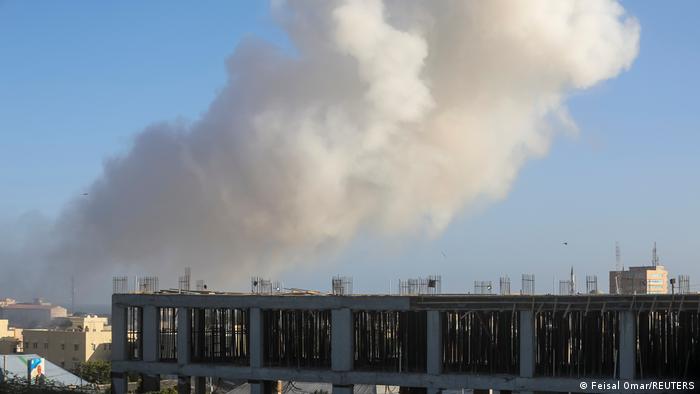 An attack on a hotel in Somalia's capital followed by a shootout between militants and security forces has left several people injured, Mogadishu police said on Sunday.

A suspected suicide car bomb loaded with explosives crashed into the entrance of Hotel Afrik in the center of Mogadishu, close to the city's strategic k-4 junction.

Government forces responded to the attack and police rescued many people from the hotel, including its owner and an army general, according to Ali.

At least nine people are believed to have died in the attack, according to local reports. Authorities have not yet confirmed casualties.

"There must be casualties because the militants first started the attack with a suicide car bomb against the wall," Reuters quoted Ali as saying. "The operation still goes on, casualties will be known later," he added.

Militant Islamist group al-Shabab, which is linked to al-Qaeda, claimed responsibility for the attack through their Andalus radio station. Al-Shabab, which wants to rule the Horn of Africa country according to its interpretation of Islamic sharia law, has been known to carry out bombings in its war on Somalia's government.

"We know, they have changed nothing from their usual tactic, ramming explosives into a building and following up, assaulting with rifles," said Ali.

Witness Ahmed Nur told Reuters that he escaped via a ladder down a wall.

"The blast made the hotel tremble as we sat inside and were talking. We were panicked, confused," he said. "I jumped down and ran. I cannot know how things were. I was scared. I heard gunfire and saw dark smoke."