Lawmakers have finally chosen a new president. Current President Mohamed Abdullahi Mohamed was hoping to stay in power after over a year of in-fighting and delays. 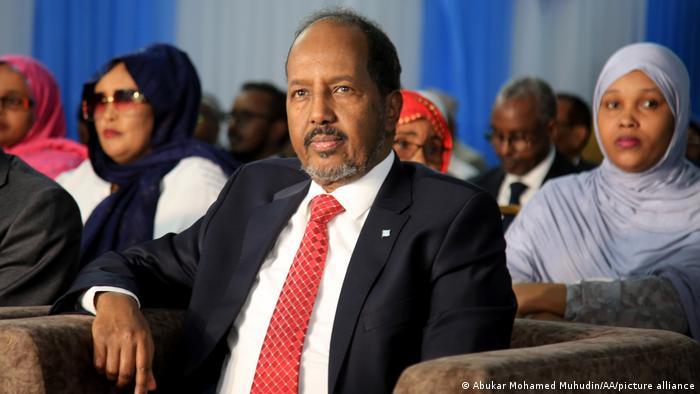 Hassan Sheikh Mohamud was chosen as Somalia's new president on Sunday, returning to the helm for a second stint five years after he was voted out.

Mohamud defeated the incumbent, Mohamed Abdullahi Mohamed, in a runoff after three rounds of voting in an election that has been delayed for over a year.

The newly elected president saw off his rival by securing 214 votes in the runoff while Mohamed could only muster 110 ballots in his favor.

The members of parliament and senators who chose Mohamud were elected by delegates chosen by clan leaders. It had been hoped that the president would be elected by the people of Somalia under universal suffrage, but this plan was eventually abandoned by the country's political elite.

News of Mohamud's victory was greeted with cheering and the firing of gunshots into the air around the capital Mogadishu.

Mohamed and Mohamud sat side-by-side Sunday, watching calmly as the ballots were counted.

"Hassan Sheik Mohamud is the winner of the election for the president of the Somali Federal republic," said the speaker of the lower house, Sheikh Adan Mohamed Nur

Mohamed conceded defeat, and Mohamud was immediately sworn in.

Mohamed leaves behind a country even more volatile than he found it.

On Sunday explosions were heard near where lawmakers were voting, underscoring the treacherous security situation in the country, which has seen an increase in attacks by Al-Shabaab in recent months. Police said no casualties were reported in the blasts.

Al-Shabab, which has ties with al-Qaida, has made territorial gains against the federal government in recent months, reversing the gains of African Union peacekeepers who once had pushed the militants into remote areas of the country.

The vote has been delayed by over 15 months, in a period beset by a violent power struggle between the president and his prime minister, Mohamed Hussein Roble.

After months of political infighting, the date was finally set for Sunday to keep in line with conditions set by a $400 million (€384 million) IMF program.

Humanitarian catastrophe is unfolding in Somalia

Mohamud will get to choose the prime minister. They will be faced with a country suffering a myriad of problems.

Besides the ongoing war with Islamist insurgents, fighting between different clans and rivals within the security forces has created a general background of violence in the country.

This in turn means that the government has a hard time in attracting foreign investment to aid development.

The Horn of Africa is also experiencing its worst drought in four decades with the backdrop of soaring food and fuel prices leading to general warnings of dangerous levels of food insecurity.