Suspected al-Shabab militants have stormed two hotels in the heart of the Somali capital, Mogadishu, killing at least six people. The terror group had pledged to step up attacks during the Muslim holy month of Ramadan. 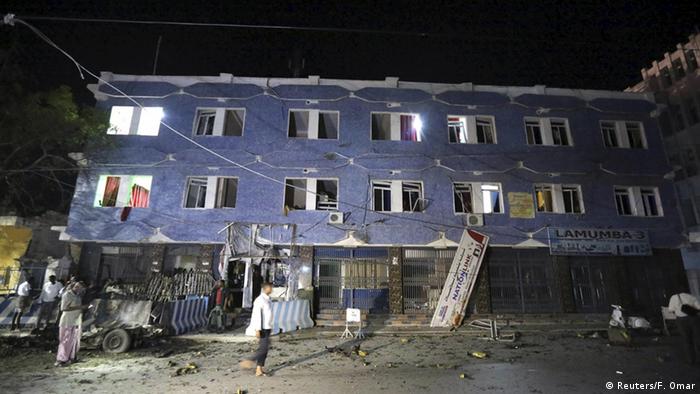 Police said the militants launched what appeared to be coordinated attacks on the two hotels Friday evening as people were preparing to break the Ramadan fast.

A Mogadishu security official said suicide car bombs exploded outside the Weheliye and Siyad hotels before gunmen forced their way into the properties and opened fire.

"So far we know six civilians died," Umar Ali, a police officer, told Reuters near Weheliye hotel. "Three fighters have been shot dead and another blew himself up inside the car bomb that hit the gate."

Witnesses said about a dozen people were wounded in the attacks.

Security guards managed to shutdown the assault on the Weheliye fairly quickly, according to officials. The Siyad, however, which is located opposite the presidential palace, was under siege for more than an hour.

Somalia's National Intelligence and Security Agency (NISA) later declared the operations over, saying "attempts to raid Weheliye Hotel thwarted, situation under control... second attack in Siyad Hotel has been brought to an end by our forces."

Al Qaeda-linked extremist group al-Shabab said it was behind the attacks, stating it had chosen to target the hotels because they are popular with government officials, diplomats and businessmen.

Somalia's government, backed by African Union (AU) forces, has had some success in pushing al-Shabab out of much of the territory they used to control around the country. Still, the group remains a lethal threat, and has launched a string of recent assaults on government, civilian and AU targets.

At the same time as the hotel raids, a military base for AU forces in Mogadishu came under attack from suspected militants, although no casualties were reported.

Al-Shabab has also carried out attacks in neighboring Kenya, including the 2013 shooting at Nairobi's Westgate shopping mall, which left 67 dead, and the April massacre of nearly 150 university students in Garissa.

Attack on African Union base in Somalia claimed by al Shabab

There have been condemnations of the attack on the African Union base in Somalia which left dozens of troops dead. Islamist group al Shabab claimed responsibility for the assault. (27.06.2015)