Three weeks after a cargo ship ran aground, efforts are being made to prevent an oil leak onto the world's largest raised coral atoll becoming an ecological disaster in the Solomon Islands. The area is a UNESCO site. 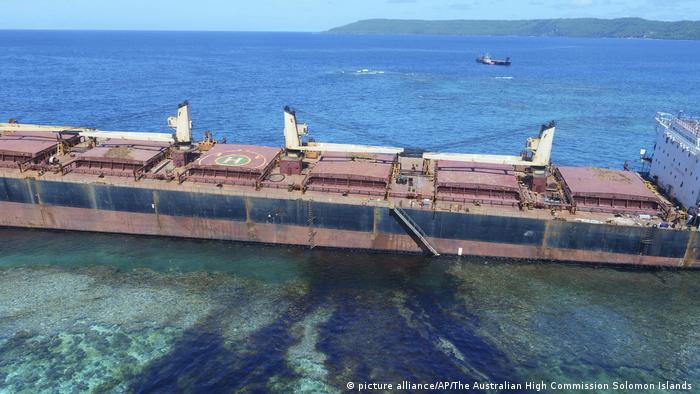 Fuel oil from the grounded freighter Solomon Trader has spread for hundreds of meters along a coral reef on the coast of Rennell Island, the southernmost island in the Solomons and the largest raised coral atoll in the world.

It is three weeks since the vessel was driven onto a reef on February 5 by a storm. Aerial photos indicate no spill containment boom in place around the stricken vessel.

An estimated 75 tonnes of oil have escaped from the Hong Kong-flagged bulk carrier, out of 600 tonnes on board. The oil poses a major threat to the World Heritage-listed marine sanctuary, which is home to many species found nowhere else.

Questions have been raised as to why the Kangava Bay mine site kept loading cargoes when a cyclone warning was in effect, given the hazards posed by the reef and the severity of the storm in the South Pacific.

Pollution mitigation experts and equipment are being sent from Australia, Foreign Minister Marise Payne said on Sunday. "Australia remains extremely concerned by the ongoing risk of a major oil spill," she said. "Up to 75 tonnes of heavy fuel oil from the ship has dispersed across the Island's sea and shoreline, contaminating the ecologically delicate area."

"Given escalating ecological damage, and a lack of action by commercial entities involved, the Solomon Islands Government has requested Australia's assistance," Payne said.

A team from the Australian Maritime Safety Authority (AMSA) was deployed last week and used aerial surveillance to monitor the spill and its threat to the UNESCO World Heritage Site.

The Indonesian firm Bintan Mining SI had chartered the ship to take bauxite from its mine on the western half of Rennell Island to China.

Australian mining company Pacific Bauxite was obliged to deny accusations in 2017 that landowners had not been properly informed about the environmental impacts of mining on the island.

The eastern half of Rennell Island was the first natural property to be inscribed on the World Heritage List in 1998. It is home to 1,200 Polynesians who live by subsistence farming, hunting and fishing. With unique limestone formations, a large lake and dense forest, UNESCO described it as "a true natural laboratory for scientific study."

East Rennell was inscribed on the List of World Heritage in Danger in 2013 for threats posed by commercial logging of its forests and the introduction of invasive rats.

The collision between the Tunisian and Cypriot ships spilled a trail of pollution stretching 4 kilometers across the water. Italy and France have sent ships to assist with cleanup efforts. (08.10.2018)

The spill from a sunken Iranian oil tanker off the Chinese coast is now about the size of Malta. But much of the environmental danger may be lurking underneath the water. (22.01.2018)