The solar-powered plane took off on the last ocean crossing leg of its round-the-world flight from New York early on Monday. If things go according to plan, it should arrive in Sevilla, Spain, on Friday. 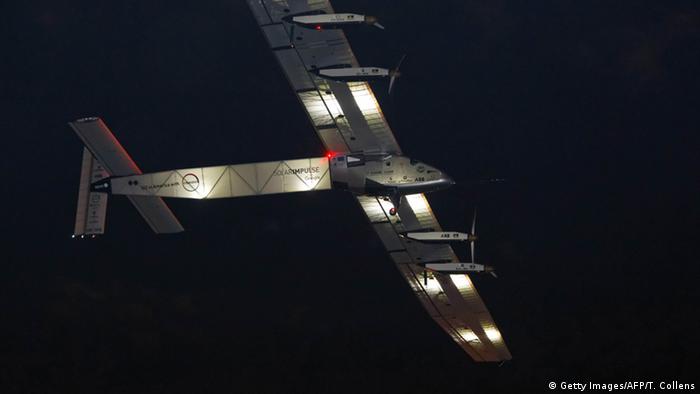 Air-travel pioneer Bertrand Piccard left New York on Monday for one of the last legs of a flight around the world with his solar-powered airplane, Solar Impulse 2. A statement on the Solar Impulse website said it took off from JFK airport at 2:30 a.m. local time (6:30 a.m. GMT).

It is estimated this last great ocean-crossing will take just under five days. The plane charges its batteries during daytime, with excess power from the sun's rays, to keep its four propellers going at nighttime as well.

The route was calculated to be 5,739 kilometers (3,566 nautical miles). If everything goes to plan, the solar plane will arrive in Sevilla, Spain, shortly after 2 a.m. local time on Friday.

Everything depends on the weather

Weather conditions are currently good - a prerequisite for the flight. If that changes, the pilot could be forced to change course or land at another airport. 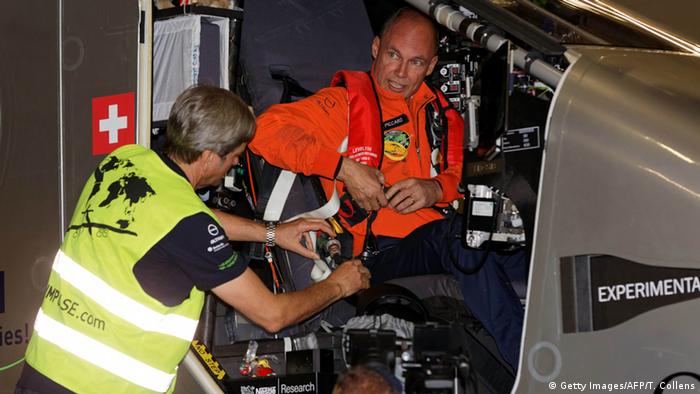 This is the 15th leg of Solar Impulse's round-the-world trip, which started on March 9, 2015, in Abu Dhabi.

After the Atlantic crossing, Piccard and his colleague, André Boschberg, have two options: they could either make their way to Abu Dhabi with one more stop, as originally planned, or they could try to fly the rest of the way in one go.

At 5,844 kilometers, the remaining distance would be slightly longer than the flight across the Atlantic, but still shorter than the one across the Pacific.

In June and July 2015, Borschberg flew from Japan to Hawaii, a distance of 7,212 kilometers.

With that, he established new world records for the longest solo flight and the longest distance ever traveled in a solar-powered plane.

While crossing the Pacific, however, Solar Impulse's batteries overheated and were damaged so badly they had to be replaced. A new type of battery was developed and built, forcing the plane to remain grounded until April 2016.

The Swiss aviation pioneers Borschberg and Piccard take turns flying. Solar Impulse 2 weighs 2.3 tons, which is similar to a medium-sized vehicle, but its wingspan is that of a Boeing 747. Borschberg and Piccard say they want to raise awareness of renewable energy sources and technologies with their project.

Solar Impulse 2 has completed the latest leg of its round-the-world solar-powered record attempt. A 17-hour flight brought the aircraft to the US east coast. (26.05.2016)