The solar-powered Solar Impulse aircraft is preparing for a landing in Spain after crossing the Atlantic Ocean. It is the latest stage in the record-setting, round-the-world, fuel-free voyage. 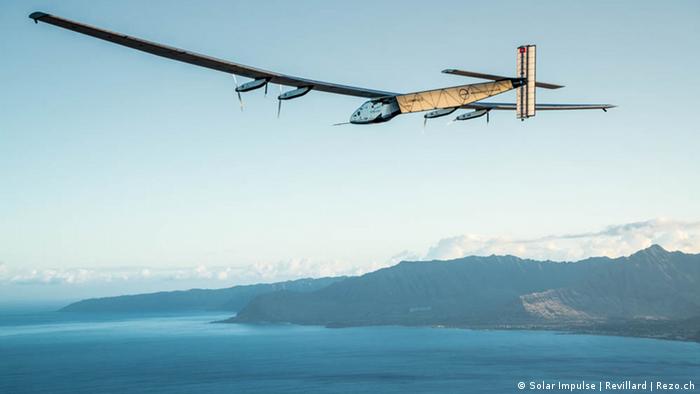 After taking off from New York on Monday morning, the solar-powered Solar Impulse 2 aircraft piloted by Bertrand Piccard is nearing Seville in Spain. It is due to land early Thursday morning after its nonstop flight over the Atlantic.

It is the first-ever attempt at a solo, solar-powered, electric transatlantic crossing with zero fuel and zero emissions. 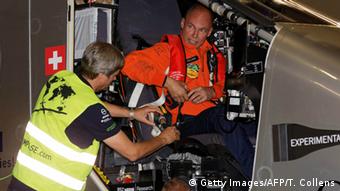 "Lindbergh's transatlantic flight marked a new area in aviation and contributed to the progress of air transport on a large scale," Piccard said ahead of his flight. "With Solar Impulse, our aim is to encourage the deployment of clean technologies everywhere. If an airplane can fly day and night without fuel, everybody could use these same efficient solutions in their daily lives."

Solar Impulse 2 travels at 48 kilometers per hour (30 mph) although its flight speed can double when exposed to full sunlight. It is powered in the night sky by energy supplied through its 17,000 photovoltaic cells. It is the same weight as an SUV but has the wingspan of a Boeing 747.

By around 1100 UTC on Wednesday, the aircraft had completed three-quarters of its 6,000-kilometer (3,700-mile) flight across the Atlantic. Swiss adventurer Piccard tweeted earlier in the day: "After a long night of turbulence and little sleep, I see the first light of the day."

The Atlantic crossing is the 15th leg of the round-the-globe record attempt, which began in Abu Dhabi in March 2015.

The aircraft has flown across Asia and the Pacific to the United States with the sun as its only source of power. Piccard and his Swiss compatriot Andre Borschberg take turns at the controls of the single-seat plane. Borschberg piloted a 6,437-kilometer flight between Japan and Hawaii that lasted 118 hours. He broke the previous record for the longest uninterrupted journey in aviation history.

The Solar Impulse Mission Control Center in Monaco said the two pilots intended to set up a new non-governmental organization (NGO) as a direct legacy of the flight, due to end in Abu Dhabi next month. The International Committee of Clean Technologies (ICCT) will group the main global actors in the field of clean technologies to bring independent and credible guidance on energy policy to governments and corporations. 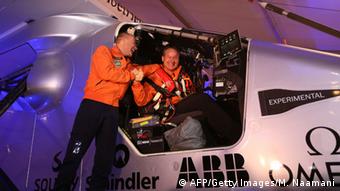 The mission of the ICCT will be to act as a common voice for the close to 400 global organizations that have joined forces to promote concrete solutions for a clean future.

“Until recently, protecting the environment was expensive and threatened our society’s comfort, mobility and growth. Today, thanks to modern clean technologies, the energy consumption of the world, and therefore the C02 emissions, could be divided by two, while creating jobs and enhancing profits. The International Committee of Clean Technologies will work in this direction," commented Piccard, currently at the controls of Solar Impulse 2.

"The International Committee of Clean Technologies is a fantastic opportunity to bring together a group of experts, with diverse experiences and backgrounds, to speak in one voice and leverage the efforts needed to bring change and influence global decision makers in the areas of clean technologies and renewable energy," added Borschberg.

The solar-powered plane took off on the last ocean crossing leg of its round-the-world flight from New York early on Monday. If things go according to plan, it should arrive in Sevilla, Spain, on Friday. (20.06.2016)