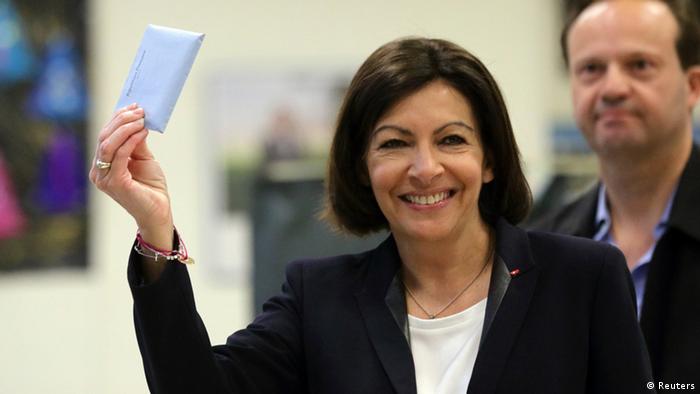 Hidalgo beat out Nathalie Kosciusko-Morizet of the center-right Union for a Popular Movement (UMP) on Sunday with 54.5 percent of the vote to take win the Paris mayoral race, according to exit polls.

The Socialist Party of President Francois Hollande also looks set to retain control of the Paris town hall. The victory is seen as a consolation for the party, however, as it fared poorly in nationwide municipal elections.

While the Socialists lost ground on Sunday, the UMP described itself as the principle victor on the night.

Cities currently under Socialist control that appeared under threat based on first round results last week included Strasbourg, Toulouse, Saint-Etienene, and Metz.

"We have had a very severe warning," said Segolene Royal, President Hollande's former partner who is a favorite to return to government in a reshuffle expected to follow Sunday's poor results for the Socialist Party. Popular Interior Minister Manuel Valls has also been broadly tipped as a possible candidate to replace Prime Minister Jean-Marc Ayrault.

As ballot counting got underway on Sunday, the far-right National Front (FN) said it was on track to win at least two towns and claim 1,200 municipal council seats nationwide. According to exit polls, the anti-immigrant party was on track to secure the mayor's seats in the southern towns of Beziers and Frejus.

"We have moved onto a new level," she said. "There is now a third major political force in our country."

The latest results add to FN's election to power in the northern town of Henin-Beaumont during last week's first round of voting. The party's previous record was winning three towns in 1995 local elections.

The party failed to achieve one of its main objectives, however, when it was unsuccessful in its bid to secure the northeastern town of Forbach.

Turnout for Sunday's poll was just 63.5 percent, a record low in France. Dissatisfaction with Hollande and a number of legal intrigues involving opposition conservatives contributed to the low number of people going to the polls.