Social Democrats vote to expel Sarrazin over race remarks | Germany| News and in-depth reporting from Berlin and beyond | DW | 13.09.2010

The national executive of the opposition Social Democrats has voted to eject controversial figure Thilo Sarrazin from the party. Sarrazin recently kicked up a storm with his views on race and immigration. 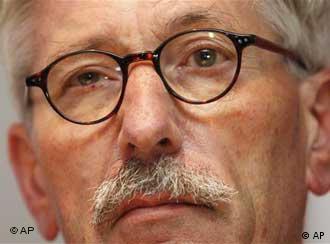 Leaders of Germany's opposition Social Democratic Party (SPD) called Monday for the expulsion of Thilo Sarrazin, the author of a divisive book that claims immigration will be the downfall of German society.

The party's general secretary, Andrea Nahles, said the SPD's 40-member national executive had cast a "united" vote to begin proceedings against the 65-year-old.

However, opposition to Sarrazin from within the SPD has not been unanimous, with several senior figures expressing their support for him in recent weeks, saying they would resist moves to have him ejected from the party.

Sarrazin tore open the ongoing debate over immigrant integration in Germany with the release of his book, entitled "Germany Does Away With Itself". In it, he argues that intelligence is largely determined by genetics, and that Muslim immigrants were lowering German standards.

The book and further comments by Sarrazin upon its release caused a furor in some quarters in Germany, but also found a degree a support from a small but not-insignificant minority.

Nearly one in five Germans polled earlier this month said they would vote for a party led by Sarrazin, according to a survey published in the daily tabloid Bild am Sonntag newspaper.

In the wake of mounting pressure, Sarrazin resigned his position on the board of Germany's central bank last week, but he has so far refused to leave the SPD.

SPD chief Sigmar Gabriel confirmed Monday the decision to seek his removal was based on Sarrazin's controversial remarks.

A party tribunal in Sarrazin's local district of Berlin must now decide whether he will be ejected.