The award ceremony for the German Whistleblower Prize in Berlin showed how differently Edward Snowden's leak of classified data can be interpreted. The state or the individual: where should the change begin? 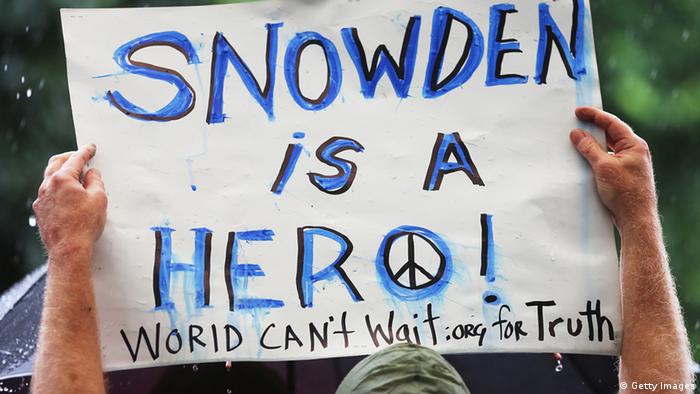 "The power of a single person can change the world - that is the lesson taught to us by Edward J. Snowden," said Glenn Greenwald, the journalist who has led reporting for the British newspaper The Guardian on material leaked to him by Snowden.

Snowden, a child of a normal middle class family, made ​​a significant choice, said Greenwald. "This made an impression on many people around the world, and inspired them to stand up against lies and falsehoods," he said. 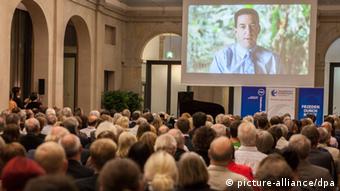 Greenwald spoke to guests at the ceremony via a video conference

Greenwald is currently in South America, and spoke to those gathered at the ceremony via a video conference. Around 300 people, mainly older scientists, intellectuals and politicians, were intently listening. Greenwald's message was one of the highlights of the eighth Whistleblower Prize ceremony, awarded to Snowden in Berlin on Friday (30.08.2013).

Snowden, who has been granted asylum in Russia, was unable to attend the ceremony in person and was represented by an empty chair in front of the guests. He was honored by the Federation of German Scientists (VDW), the International Association Of Lawyers Against Nuclear Arms (IALANA) and Transparency International for leaking information about US National Security Agency (NSA) surveillance of Internet and phone traffic as well as other classified data. Snowden worked as a contractor for the NSA.

The power of the individual

Internet activist Jacob Appelbaum spoke with Snowden before the event and accepted the award on his behalf. Speaking in front of the crowd, he said Snowden had asked him not to talk too much about "geopolitics."

"Instead, he asked me to speak about individuals and about the hope for change," said Appelbaum. He said everyone had the strength to stand up against corruption, war crimes and lies - every day and at any time. It wasn't so much about the topic of Internet freedom, but personal freedoms - spying on the Internet is commonplace, he said, something from which no one is immune. "That's why we need an honest discussion of whether and how much we want to spy on each other."

Change begins with a single voice

"He did away with the propaganda machine and did it for all of us," said Appelbaum. Snowden was described as a man who truly cared about the welfare of others, a man who had earlier asked Appelbaum first if he had slept well before asking whether everything was organized for the event. That was typical of Snowden. 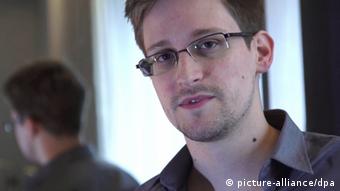 Appelbaum then read a letter from Snowden, who thanked the organizations for the award before symbolically sharing it with "all the individuals and organizations in the countless countries all over the world who have overcome linguistic and geographical boundaries to come together and defend the public right to truth and the value of privacy."

It wasn't him, Snowden said, but newspapers which began to ask questions. It was politicians who wrote proposals for new Internet protection laws. And he then thanked all those who convinced their friends and family how important these things were, "because change starts with a single voice."

Snowden's message to the world, according to Appelbaum, was that "governments must be held accountable for their decisions that shape our lives. Freedoms and the rights of individuals must be decided by governments in public, and not in darkness."

He said the path is a difficult one, but one that would lead us to a better world for future generations.

Appelbaum said that neither he nor Snowden were against the United States, but against corrupt forces in the current government. "As American citizens, we ask you here in Berlin for your solidarity and support," he said, adding that Germans especially with their difficult 20th century history could encourage people to overcome the fear that controls them and begin to change.

"You must talk about how the current affair scares you, how it's reminiscent of the time of the secret police in the GDR. And you can tell from personal experience what it means to live in dark times."

Call for Snowden's asylum in Germany 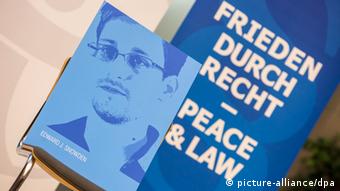 Some guests at the ceremony said Germany should offer Snowden asylum

Edda Müller, the chair of Transparency International in Germany, also spoke at the event and challenged the German government over its lack of implementation of international anti-corruption measures. Müller said whistleblowers were vital, not just in Snowden's case but also to protect the economy and uncover corruption.

In her speech, renowned journalist Sonia Seymour Mikich called Snowden's revelation of the NSA affair historic. "No one will be able to say later that he heard nothing of the creeping erosion of democracy," she said. She added that it was shameful that Germany and other Western countries had not offered Snowden political asylum, a criticism echoed by IALANA head Otto Jäckel.

Wolfgang Blau, the Guardian’s director of digital strategy, tells DW that anti-American bias in German newsrooms may have prompted journalists to focus on the US scandal while ignoring the UK's role. (29.08.2013)

Led by the United States, the West is increasingly abandoning the basic right to privacy and threatens to become a transatlantic surveillance society. Only citizens can stop this development, writes DW's Michael Knigge. (22.08.2013)

German IT benefits from NSA affair

Opportunities for German IT companies have emerged since the leaks about collaboration between US Internet companies and the American intelligence agency, the NSA. Users are seeking secure, anonymous data services. (27.08.2013)