The Berlin-based Mobisol company is bringing power to places where there has been none. By combining mobile phone technology and solar power generators, the company aims to electrify African homes. 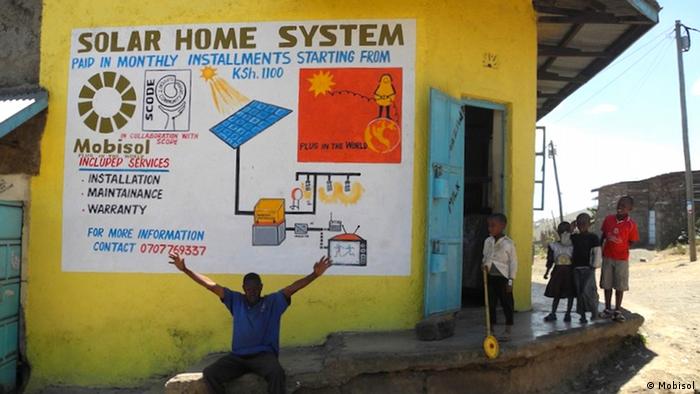 To get an office in the Friedrichshain area of Berlin is not easy. After a long search Mobisol managed to rent an office on the fourth floor at the back of an old factory building. From a hallway rooms branch off where employees sit in front of their computers. One room is used as a small workshop. The walls are full of photos showing African people: standing around small solar panels in their villages, installing solar panels on roofs of corrugated iron sheets, watching TV in a small room, listening to radios or working with laptops. They are photos of African customers and colleagues.

"They are there to remind us that we are providing a service to the people on the ground in Tanzania, Kenya and Rwanda, who are selling our products there," said Thomas Duveau, one of Mobisol's strategic heads. There are about 30 employees at the company's headquarters in Berlin. They work in various departments from software development to administration. 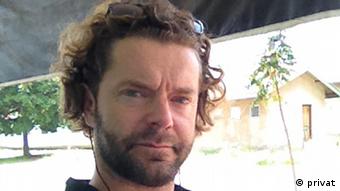 Thomas Duveau is a strategic planner at Mobisol

The real Mobisol product is not made in Berlin. The workshop in the German capital is used to try out new ideas. All solar panels and batteries are purchased in China and shipped directly to Africa. Mobisol's most important product is made by the Schwedt company in the German state of Brandenburg. It is a yellow plastic box, the size of a shoebox.

Inside the box there is the control facility for the solar power system and a mobile phone SIM card that connects the box with Berlin. The only requirement for the technology to work is a functioning mobile network. That can be found, for example, in Tanzania, Kenya and Rwanda. 85 percent of people there have mobile phones but not all of them have electricity. They frequently use their mobile phones for money transfers. For many, the only way to charge the phones was by using diesel generators. "Our solar power systems enable people for the first time to produce power in their homes," said Duveau.

The smallest of the simple yet robust sets of equipment delivers 30 watts. In just one hour it can be installed on a roof from where it provides light for up to three lamps, while also powering a radio and charging a cell phone. The largest plant produces 200 watts and can power a refrigerator as well as lighting several rooms, a stereo unit and a TV. 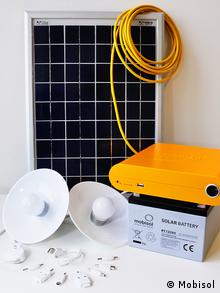 The Mobisol power box is simple and robust

In Germany, a family of four uses an average of 3,500 kilowatt hours of electricity per year. In Tanzania, a family uses one tenth of that amount. Businesses, of course, consume more energy. In response to requests from entrepreneurs, Mobisol is currently developing a 600 watt system which can operate a small workshop.

Via the SIM card installed in the system, signals are received every hour in Berlin indicating whether the system is producing power. "If not then we send a text message request to one of our local partners, with the address of the customer, to quickly go there and check the status," Thomas Duveau told DW.

"That means we sometimes know before the customer that there is a problem with the system that needs to be fixed. That's a level of service that is quite rare in East Africa."

Customer service includes a toll-free hotline in the local language and the guarantee that a defect system will produce electricity again within 72 hours. 220 employees are working for Mobisol in East Africa, most of them in Tanzania. All were trained in their home country by German technicians.

One very important element for African customers is the micro-financing. Customers have three years to pay for the equipment. It then belongs to them. Depending on the size of the solar power system, they pay between seven and 33 euros ($9 to $45) per month. That is often less than they have been used to paying for kerosene lamps or diesel generators. 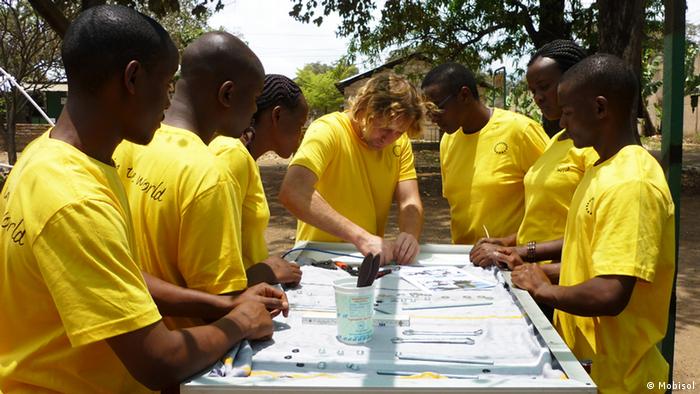 Mobisol has 220 employees in East Africa, all trained by German technicians

Payments are made using mobile phones. 97 percent of the payments are transferred without any problem, said Thomas Duveau.

"Should a customer fail to pay an instalment, we have the ability to shut down the plant from Berlin, thanks to the SIM card incorporated in the system," he added. When that happens, the outstanding payment is usually quickly made and the equipment is turned back on again.

Regular payments are vital for the company's survival. During its first years, Mobisol received some funding from the European Union and from the German Reconstruction Credit Institute (KfW). 1,000 sets of equipment were financed by the German Federal Ministry for Economic Cooperation and Development.

Judging by the age of the company and its employees, Mobisol is a startup. 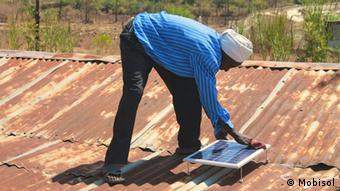 Mobisol hopes to have 10,000 customers by the end of the year

Only three years ago, the first prototype of the solar power system was developed by three engineers in a garage in Berlin. The company started pilot projects in Tanzania and Kenya in 2012. In April 2013, the company made its first official sale.

Currently, the company has 3,000 customers and is expecting to have 10,000 by the end of this year. Thomas Duveau is confident that Mobisol could become Africa's largest energy supplier by 2020.

Currently, the company is negotiating with the Rwandan government which wants to provide 70 percent of the population with access to electricity by 2017. At the moment, this is only the case for 17 percent.

In Berlin, the company's strategists are currently considering how they can combine swift growth with good quality and service. Time is pressing - Mobisol has just received an enquiry from the World Bank asking if it can envisage large-scale production.

According to a new UN report on climate change, time is running out for the world to address global warming and avert all out disaster. (14.04.2014)