Small Plane Crashes Near German Parliament | Germany| News and in-depth reporting from Berlin and beyond | DW | 23.07.2005

An ultralight small aircraft crashed between the German parliament and Chancellor Gerhard Schröder's office in Berlin Friday, killing the pilot. Police ruled out a terrorist attack. 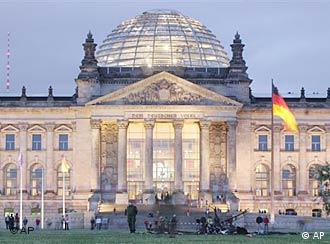 The single-engined plane hit the grassy ground between the two structures and burst into flames shortly after 8:30 pm (1830 GMT), around 200 meters (yards) from Schröder's chancellery and 300 meters from the parliament building. No one was injured.

The cause of the crash was not immediately known, but indications suggested that the pilot committed suicide.

Berlin's interior minister Ehrhart Körting rushed to the crash site shortly after news of the incident broke, but ruled out a terrorist act. "There is no indication at this time that this could be a terrorist act," he said, adding that the crash could be an accident or a suicide.

A police officer said the plane probably took off from an airfield in Brandenburg state which surrounds Berlin.

Witnesses said the single-engine plane flew over the parliament's futuristic glass cupola before nosediving to the ground and going up in flames.

Alfred Kosel, a 52-year-old tourist, described the aircraft as "a small propeller plane, similar to a World War I biplane; it was also painted like those planes. I didn't hear the engine misfiring, nothing which would suggest engine trouble," he said.

Suicide due to family problems?

The weekly Focus magazine reported Saturday that the crash was probably a dramatic suicide, reporting that the pilot was a refuse collector suspected of murdering his wife who has been missing for several days.

The pilot was named as Volker Klawiter, 39, who lived in the neighboring Brandenburg district.

By the time firefighters arrived at the scene the plane was already entirely destroyed by fire.Police sealed off the area and the body was taken to a morgue for examination and formal identification.

The incident, which led to much anxiety in the area around the parliament building in Berlin on Friday evening, has triggered a hot security debate in the German capital.

Overflights of the capital by small planes are authorized but an investigation will be carried out to determine how the aircraft could get close to sensitive buildings such as the parliament and the chancellery.

Bavarian Interior Minister Günther Beckstein urged a "urgent ban on overflights all year long" at "politically sensitive places" in Germany. Brandenburg's Interior Minister Jörg Schönbohm called the incident "a unbelievable security gap" and said that airspace monitoring had to be adapted to make sure that no flying object could slip through.

But Berlin's Körting was sceptical. He said that "absolute security" could only be guaranteed if one slapped a ban on flying in a radius of about 100-200 kilometers around Berlin, adding that such a ban would mean that all airports in Berlin would have to be closed.

A debate has erupted in Germany about the political consequences of the London bombings. Opposition leaders have called for stricter anti-terrorism measures, while the ruling coalition says it's doing enough. (July 8, 2005)

Governments across Europe beefed up security on Thursday following a series of deadly rush-hour bombings in London, with police stepping up patrols in airports, rail stations and public transport systems. (July 7, 2005)