Leftist Slovak Prime Minister Robert Fico's party came out on top of Saturday's polls, but a coalition of center-right parties that have sworn not to work with him have won a majority in parliament. 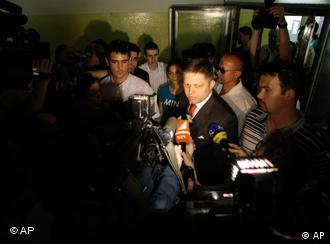 Parliamentary elections in Slovakia have seen the current leftist coalition lose its majority, although controversial Prime Minister Robert Fico says he retains the right to lead any talks on forming a new government. Meanwhile four centre-right parties with a total of 79 seats in the 150-seat parliament have claimed victory, saying the people of Slovakia have given them a clear mandate for change.

He won, yet it seems he might have lost.

Robert Fico, the uncompromising premier who promised to shield Slovaks from the worst of the global financial crisis and protect them from Hungarian revisionism, saw his SMER party win almost 35% of the vote - an impressive result for a party that's been in government for the last four years.

"It's a result that gives us the right to receive the go-ahead from the president to lead talks on forming a government," he told bleary-eyed journalists at a pre-dawn press conference. 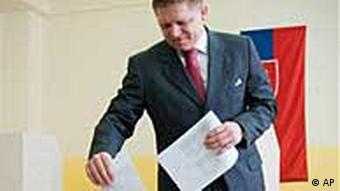 Fico has not conceded defeat just yet

But in the same breath, Fico conceded that his efforts may be in vain, and SMER may end up in opposition, where it would provide a "clear alternative" to a potential center-right coalition.

SMER may control 62 seats in the new parliament, but the party looks isolated. His two coalition allies did not fare well. The ultra-nationalist Slovak National Party (SNS) barely scraped the 5% threshold into parliament. However, the Movement for a Democratic Slovakia (HZDS) - the party of Slovakia's authoritarian former prime minister Vladimir Meciar - was unceremoniously kicked out.

Observers are already calling that "the final end of the Meciar era." The heavy-handed, autocratic politician who led his country into international isolation could now be on the brink of political retirement.

Together, SMER and the Slovak National Party will command 71 seats - several short of a majority. The only way Prime Minister Fico can stay in power is if one of four center-right opposition parties choose to lend him their support - an unlikely, but, analysts stress, not impossible, prospect.

The champagne was flowing, however, over at the headquarters of those four parties - two of them brand new. The center-right Slovak Democratic and Christian Union (SDKU) - which presided over government from 1998-2006 and undid much of Meciar's damage to Slovakia's international reputation - emerged with 15% of the vote. 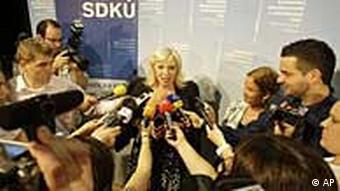 Radicova could be the leader of a new, center-right coalition

The party's new leader Iveta Radicova described the centre-right's majority as "a beautiful morning miracle", and said "change for Slovakia was truly around the corner."

Radicova added that, as soon as Sunday, talks would be convened with three fellow center-right parties on forming a coalition government - the newly-created Freedom and Solidarity (SaS), the Christian Democratic Movement (KDH) and Most-Hid, a joint Slovak-Hungarian party that promotes unity between Slovaks and ethnic Hungarians.

Priorities for a potential center-right government would include trimming the deficit by reforming public finances. The four parties had promised austerity steps before the election to get Slovakia's export-driven economy, which has been battered by the global financial crisis, back on track.

An ethnic Hungarian party in power would at first glance seem to raise the prospect of some sort of reconciliation with Hungary. However, the party with the closest links to Budapest's nationalist government - the Party of the Hungarian Coalition (SMK) - had a disastrous election, failing to retain any of its seats in parliament, as Slovakia's 500,000 ethnic Hungarians put their faith in the more moderate Most-Hid.

But even if the four parties do manage to agree on a government, the new cabinet may lack stability. With a majority of just eight seats in parliament, it could be a shaky coalition. Dark predictions of failure came from Fico himself, who said such a government would last "a year, at most."

Perhaps the biggest change for Slovakia will be the style of its next leader. After being ruled by men for its 17-year-history as an independent state, Slovaks may be about to find themselves governed by Iveta Radicova, their first female prime minister, one who promotes dialogue over confrontation.

Slovaks have gone to the polls in an election that will decide whether controversial Prime Minister Robert Fico remains in power. The center-left leader is seen as a protector by some and "the European Chavez" by others. (11.06.2010)

Slovakia has approved legislation, now signed into law by the president, which will allow the authorities to strip citizenship from Slovaks who become Hungarian citizens. (31.05.2010)

Ninety years after Hungary lost two-thirds of its territory in the Treaty of Trianon, a new law grants Hungarian citizenship to ethnic Hungarians living in bordering nations. But not all border nations favor the law. (26.05.2010)