The peace research institute SIPRI has provided new data relating to the international arms trade. The biggest exporter is the US, well ahead of Russia. The main customers are in Asia and the Middle East. 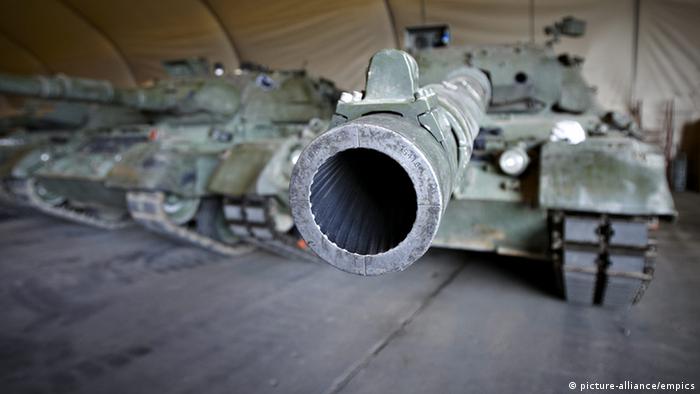 Just 10 days ago the Russian prime minister, Dmitry Medvedev, said at the Munich Security Conference that in his view the world was experiencing a new Cold War. 'Hot' wars are already being waged in Ukraine and, in particular, in the Middle East. In East Asia, China's aggressive behavior is worrying its neighbors, while in South Asia relations between the rivals India and Pakistan remain extremely tense.

At the same time, there is growing international insecurity because of the increased terrorist threat. The extremely tense global security situation is mirrored in the flourishing trade being done by the big armorers, as is apparent from the most recent figures provided by the Stockholm International Peace Research Institute (SIPRI).

To balance out fluctuations resulting from big armaments contracts, the SIPRI experts have grouped the worldwide transfer of arms in five-year periods. Fourteen percent more arms were exported worldwide in the last five years than the five years that preceded them.

The majority went to Asia and to the crisis region of the Middle East. Between the Persian Gulf and the Bosphorus, imports of heavy weapons – the SIPRI report is concerned only with these – rose by 61 percent. Between 2011 and 2015, India was the only country to import more weapons that Saudi Arabia – a land with just 30 million inhabitants. Compared with 2006–2010, the oil sheikhdom's arms purchases have almost trebled. Number four in the list of the biggest importers of arms is the United Arab Emirates, with a population of barely five million. Turkey is number six.

SIPRI expert Pieter Wezeman does not seem very surprised by these developments. The region is characterized by conflicts, he said in an interview with DW, both internal and between countries. The countries in the region have large budgets; this, he said, was only now starting to change as a result of the low price of oil. Furthermore, these countries had no arms industry of their own and therefore had to buy on the international market. 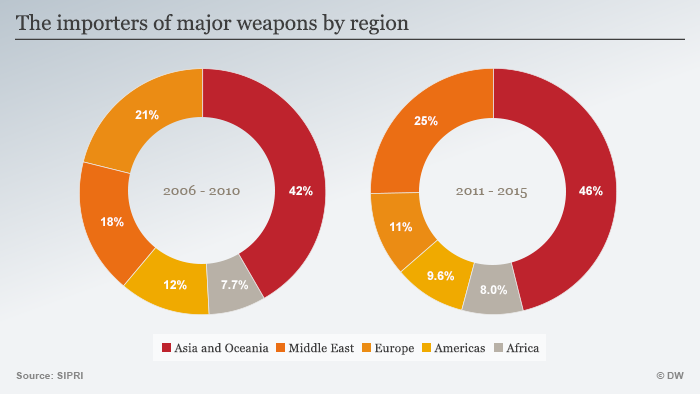 The majority of worldwide arms exports went to Asia and crisis zones in the Middle East.

Other notable shifts on the purchasing side: Mexico's imports of heavy weapons have more than trebled in the past few years compared to 2006–2010: a consequence of the drug war, which has claimed an estimated 100,000 lives over the past 10 years. The arms trade expert Wezeman explains that Mexico has, among other things, invested heavily in light armored vehicles "that provide protection against assault rifles or machine guns, but not against rockets."

More than half the arms imported into Africa are brought in by just two countries: the neighboring states of Morocco and Algeria. Thanks to their relatively good economic situation, both countries have the means with which to buy arms. According to SIPRI expert Wezeman, they regard each other with great mutual distrust and have entered into an arms race against one another. Overall, despite its many simmering conflicts, sub-Saharan Africa in particular was not a very significant market for heavy weapons because of its predominantly weak economies.

Here, too, Wezeman sees a problem. He says that although many African states are involved in peace missions, their soldiers are often poorly – or wrongly – equipped. "These states are not investing in the weapons that would be needed for UN operations. They're investing in other weapons, buying them more for the prestige."

On the side of the arms exporters, the USA and Russia have developed their positions as the most important suppliers of military equipment. The USA alone accounts for one-third of arms exports worldwide: Its exports increased by 27 percent. The USA has been constantly replenishing supplies in the Middle Eastern crisis region in particular. Its most important customer was Saudi Arabia; the UAE was in second place, followed by Turkey. 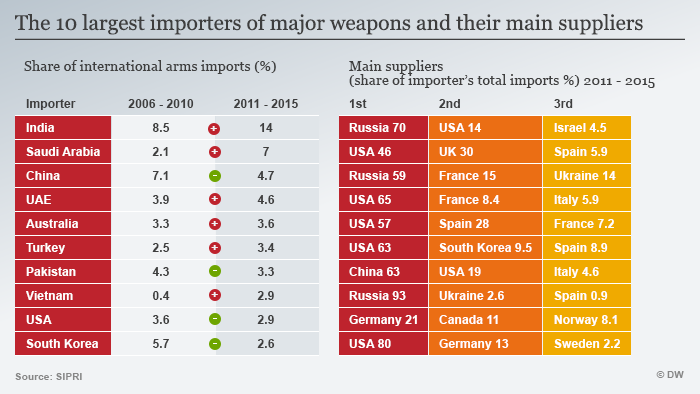 The United States accounts for one-third of all arms exports worldwide.

A quarter of global arms exports come from Russia. Its most important customers were in India, China and Vietnam. China itself almost doubled its arms exports, up 88 percent compared to 2006–2010. It now has an almost 6 percent share of the international arms trade, putting it at number three, ahead of France, and has established itself on the international arms market as an important producer. Wezeman attributes this to the improved quality of Chinese weapons. Chinese military equipment goes primarily to Pakistan, Bangladesh and Myanmar, but China is also trying to gain a toehold as an arms supplier in Africa.

Between 2011 and 2015 the Western European countries France, Germany, Britain, Spain and Italy together controlled one-fifth of the worldwide transfer of weapons. France's exports, however, dropped by almost 10 percent in this period, and German arms exports actually halved.

The reason for this was the economic crisis in many European countries. Some European states simply don't have the money for expensive equipment, Wezeman explained. That in turn increased the pressure on the European arms industry to open up new markets. The SIPRI arms trade expert observed that Germany in particular was aggressively trying to sell its weapons systems in places like the Middle East and Asia.

Report: Russia to start delivery of S-300 missiles to Iran