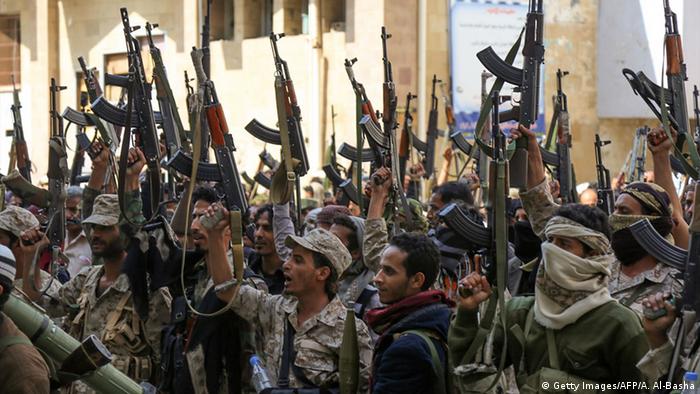 Your report provides a wealth of data about weapon manufacturers and their revenue. What are the most striking changes in the big picture to the previous report a year ago?

The first development which has to be pointed out is the fact that the total sales of the world's top 100 arms producing companies are quite stable. They have gone down a bit over the past two years, but not that much. We are also seeing a more regional, or more national development - and one of them is very clear: Russian companies have seen a very steep increase in their total sales. So, the companies in the top 100 based in Russia have increased their revenues from 2013 to 2014 by almost 50 percent. That is a very significant change. By contrast, there was a fall in revenues of companies in the US and western Europe.

And finally, we see that there are some other countries, some smaller countries, or some new producers, I should say, countries, like Turkey and South Korea in particular, which can be mentioned here. There we see continued growth over the years of their arms industries. They are the new players, you could say, in the global arms industry.

In April, SIPRI noted that Saudi Arabia had already become the fourth largest importer of weapons worldwide. In light of developments in the Middle East, looking at Yemen, looking at Syria and Iraq, the arms industry - according to an article in The Intercept - is sort of rejoicing. What is the picture there?

The arms industry is, of course, dependent on the security situation in the world, or in certain regions. So, the growing violence and use of force in the Middle East over the past few years means that the demands for weapons by both states in the Middle East, but also states outside of the Middle East which intervened - such as in Europe or the US, or Russia - are interested in using force in the conflict. 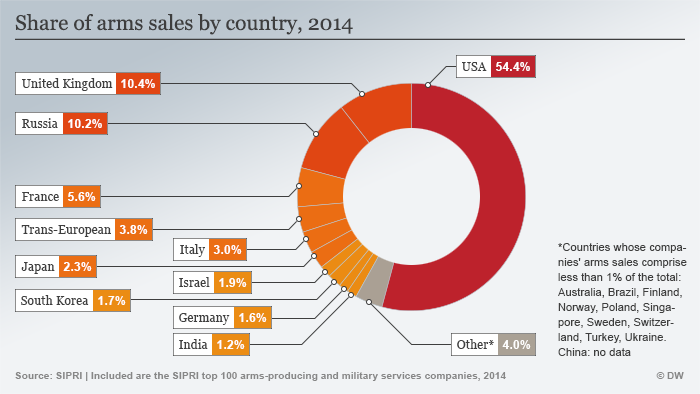 As a result they will first have to stock up their depleted ammunition, which they directly use. But, of course, the use of weapons in the Middle East also strengthens the idea that the military is important, not only in Saudi Arabia, but also in Germany, or in Sweden, where states do see more reason to reassess their military budgets in the light of what is happening in the Middle East.

Of course, that´s not the only important development. If we look to Europe, we see that the crisis in Ukraine does very much the same for companies in Germany. The crisis in Ukraine is probably much more important than what happens in the Middle East because it sets in motion a process where the German government is now looking at increasing its own military budget. The German government is the most important client for the German arms industry. And this is true for the arms industry in general. Companies are primarily looking at their own governemnts as the first and foremost clients.

Talking about Germany: It is one of the two countries in Europe that has increased its arms exports against the trend. What is behind that?

These are Thyssen-Krupp, which makes ships and submarines, and Rheinmetall, which focuses on land-based systems. Thyssen-Krupp has been particularly successfull selling submarines. Submarines are sold to Israel, South Korea, Turkey, Greece - and that´s where they are the world leader. They also supply naval equipment to the German Navy. so that is where they have been particularly successfull.

Rheinmetall has a broader package of products to sell where it is not so easy to find out where it has been particularly successfull. One area is that the German armed forces are looking for new armored vehicles. I mentioned already the case of Ukraine and that´s related to those kind of developments. Rheinmetall benefits from a renewed interest in armored vehicles in Germany. But is also has been successful in selling products to the Middle East where they were not very present in previous years. That is particularly the case with Algeria and Qatar. 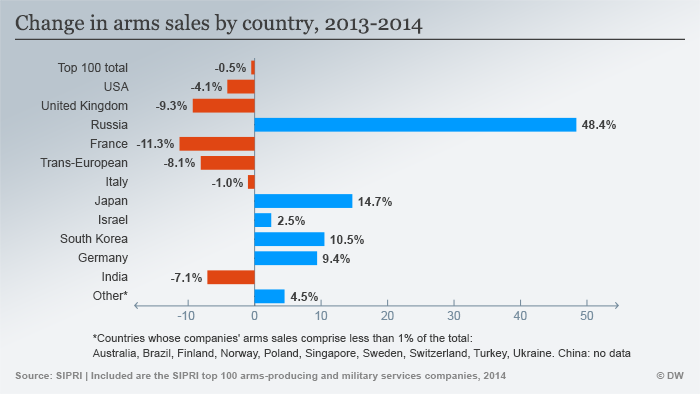 How does the German increase in arms sales fit into the picture of Vice-Chancellor and Economics Minister Sigmar Gabriel's stated aim of reducing German arms exports?

We are talking about arms sales and arms exports here. Arms sales in general terms are part of the national procurement and the exports are only exports then. When it comes to exports: Yes: certain German companies have been quite successful in exporting arms. Some of that goes to countries which are not countries of concern. They are NATO countries, or South-Korea.

That is not really what the German debate on more restrictions to arms exports has been focusing on. But the thing is: Over the past few years we have also seen that Rheinmetall and Thyssen-Krupp have been able to sell some of their products to countries like Egypt or Qatar. And there, yes, you can then question to what extent this is in line with stated policy objectives of being more restrictive. The answer to that partly is: These deals were signed some years ago, before this new development, before Sigmar Gabriel pronounced his intention to be more restrictive. And secondly - especially when it comes to sales by Thyssen-Krupp - it involves naval equipment; equipment that arguably does not have a direct relation to repression and human rights violations in countries like Egypt, Saudi-Arabia, Qatar, etc.

Looking at Germany´s arms exports which increased significantly in 2014: Is that just a one-time-effect because of the volume of the ship and submarine sales, or is that going to be a long-term, sustained trend?

The problem with arms sales is that they depend on a few major contracts. You get a major contract, you fill that. And then there is a gap. And so sales drop for a while. But then they can go up again.

A good example is Krauss-Maffay-Wegmann, a tank producer in Germany. It had very high sales around 2008 and now they have dropped to a level which is less than half to what is was in 2008. In 2008, they happened to have two major contracts for the sale of Leopard II tanks to Spain and Greece. But now, there is a new contract, signed two years ago, for the sale of tanks to Qatar. So it may very well be that next year we see quite a strong increase in arms sales at Krauss-Maffay-Wegmann. 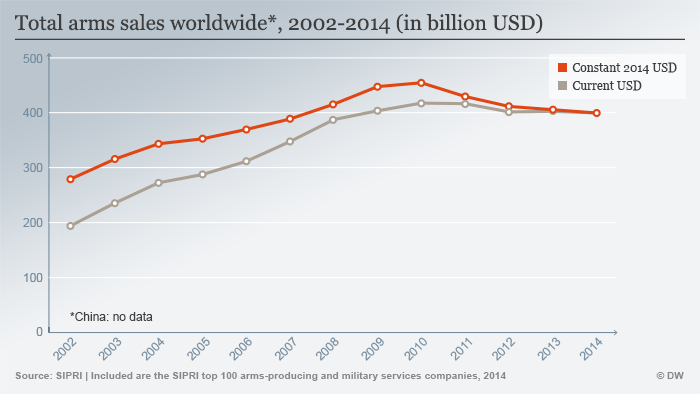 But for the two major companies in Germany which are purely German, Rheinmetall and Tyssen-Krupp, it seems more long term. Of course, the one company that we don´t rank as a German one and is the most important arms producer in Germany is Airbus. It also has fluctuating arms sales at currently around 15 billion US dollars a year. Airbus also has be taken into account more.

Taking a look at a country that does not even show up in your report because of a lack of data: China. Given the military aspirations of China – and the aspirations of its industry: If you had to guess in view of the data you have – as incomplete as it might be - where would China stand?

China is definitely a very important producer of arms. The little information that is available makes us believe that at least nine, maybe ten, companies in China would figure in our list of the top 100 arms producers. We believe about four to six of them would probably figure somewhere in the top 20 and it might be even, that there is one Chinese company - an aircraft producer - which might actually figure among the top 10 in the world. We are not sure about this. But it is very clear that they play a very important role and that they play an increasingly important role, based both on the fact that Chinese military expenditures have increased steeply over the past decade. China has also become increasingly successful in exporting its arms to a wide variety of countries. Everything points at the fact that the Chinese arms industry is growing and that it is definitely one of the most important arms industries in the world.

Pieter D. Wezemann is a senior researcher with the SIPRI Arms and Military Expenditure Project.

This interview was conducted by Matthias von Hein.

Pepper spray, stun guns and gas pistols are in high demand in Germany

Germans are increasingly buying self-defense products, according to a weapons industry group survey. Citizens are reasoning that if terror attacks can happen in Paris, they could happen in Germany, too. (10.12.2015)

A German newspaper has reported possible links between the illegal arms trade in Germany and the November 13 terrorist attacks. Officials have declined to comment on the report. (27.11.2015)