Donald Trump's spokesman says the former reality show host will consider restarting the Dakota Access pipeline project when he takes office. The Army Corps of Engineers refused to grant an easement for the pipeline. 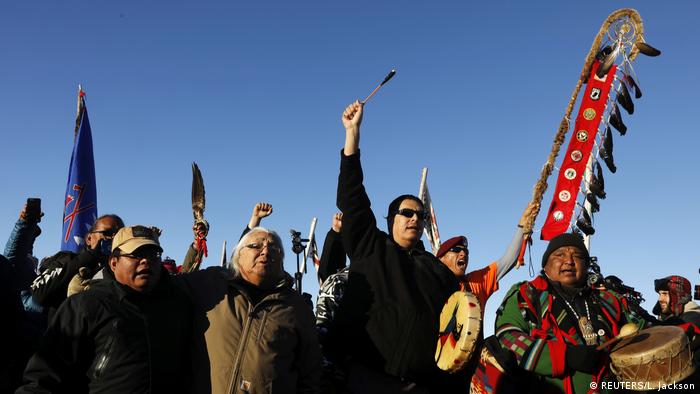 Trump planned to meet with North Dakota Representative Kevin Cramer, a fellow Republican who criticized Sunday's decision by the US Army Corps of Engineers to deny the final permit for the pipeline. Cramer said the "unfortunate decision sends a very chilling signal to others who want to build infrastructure in this country."

Last week, Trump's transition team met with North Dakota Senator John Hoeven, who also supports the project. "Mr. Trump expressed his support for the Dakota Access Pipeline, which has met or exceeded all environmental standards set forth by four states and the Army Corps of Engineers," Hoeven had said last week in a statement. The Army Corps of Engineers decided against the pipeline under the Missouri River, the Standing Rock Sioux's water supply, after the tribe expressed concern about pollution and the pipeline's intruding into sacred areas. Since April, members of multiple tribes have protested the pipeline despite stepped-up police violence and the onset of a freezing winter. Though protesters celebrated their victory over Big Oil on Sunday, on Monday they faced a tough road ahead.

"There are still some remaining questions," Dallas Goldtooth, a protest leader, told the news agency AFP. "The biggest one of all is to see what a Trump administration will do."

Energy Transfer Partners, which runs the pipeline, has called the decision not to grant the permit "purely political." Trump owns thousands of dollars in stock in ETP, and the company's CEO, Kelcy Warren, donated $103,000 (95,600 euros) to efforts to get him elected president. ETP could still prevail over the Army Corps of Engineers in federal court to complete the 1,172-mile (1,886-kilometer) pipeline.

Other honchos have urged Trump to chose industry over indigenous people. The American Petroleum Institute asked him to make approval of the pipeline, which is worth $3.8 billion, a "top priority" when he takes office. President and CEO Jack Gerard said the Obama administration "is putting politics over sound public policy." He said Trump should "stand up for American consumers and American workers."

The MAIN Coalition, which supports construction businesses, called the decision to deny the permit "arrogance that working class Americans soundly rejected on November 8."