One of the world's most beloved Christmas carols, "Silent Night" was written nearly two centuries ago, yet keeps resonating in Christmas festivities.

For millions of people around the world, "Silent Night" is an emblematic symbol of the festive Christmas spirit. According to a representative survey, it is - among Germans - the most beloved of all Christmas carols. Here in Germany, the verses are sung near a decorated evergreen; in Africa, under the branches of palm trees. People in England may sing it under the mistletoe. The lilting melody sounds out from the glacial ice in Alaska through the rain forests of South America. An international classic, the song is sung in more than 300 languages and dialects the world over.

The original text, "Stille Nacht," was written in German in 1816 by assistant preacher Joseph Mohr (1792-1848) in Mariapfarr, a small village in the Lungau region of present-day Austria. That's according to a document written by Mohr himself which was not discovered until 1996. In 1817, when Mohr moved 100 kilometers to Oberndorf, a small village in the Salzach valley near Salzburg, he took the text with him. Oberndorf had recently become a border town; the Salzburg region became a part of Austria, while the Berchtesgaden region was tapped to Bavaria. For the most part, the area was inhabited mainly by impoverished mariners and raftsmen. 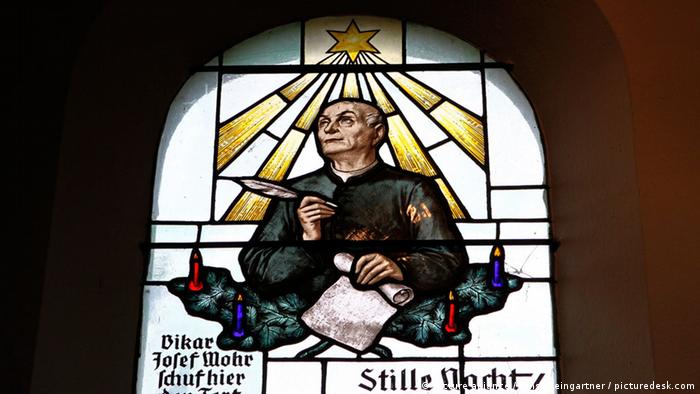 Mohr, who was deeply commited to social issues, got to know the village school teacher and organist Franz Xaver Gruber (1787-1863). They quickly discovered that they made a good team. Just before Christmas, they realized that the church organ no longer functioned. Years later, Gruber wrote that that was how the Christmas song came about.

"It was on December 24, 1818 that the then-assistant priest Mr. Joseph Mohr at the newly established St. Nicolas parish in Oberndorf handed a poem over to substitute organist Franz Gruber, requesting a fitting melody for two solo voices without choir but with guitar accompaniment." 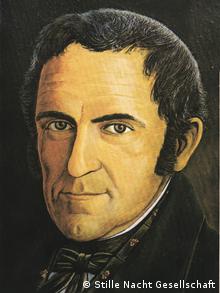 The new song thus sounded out during midnight Mass on December 24, 1818 - in a humble Christmas atmosphere. Mohr sang tenor and Gruber sang bass, both accompanied on guitar. Six verses were sung at that first performance - not just the three we are familiar with today. It is said that the premiere was a great success.

As to what happened to the Christmas carol "Silent Night" after that, there are several variations on the story. One has it that the song was forgotten despite the positive reception it received from worshipers at its debut. It wasn't until six years later, when the defective church organ was repaired in 1825, that an organ maker discovered the sheets of music and took them with him to his Tyrolean home.

Another account has that an internationally well-known family of singers from Tyrol, the Rainers, performed the song in 1822 for Russian Czar Alexander I and Austrian Emperor Franz I. 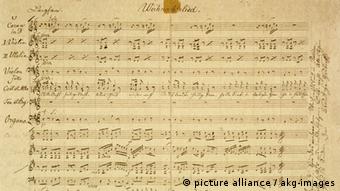 But according to the "Silent Night Society" in Oberndorf, one thing is certain: "A leaflet found in an antique shop in Vienna is the oldest copy of the 'Silent Night' text!" The latest research has it that the print can be "dated back prior to 1832," which would be 14 years after the first performance. Before that, it was likely known for years as a Tyrolean folksong.

Around 1832, the song "Stille Nacht" was sung in public in Leipzig. Then it spread like wildfire. In Berlin, Prussia's King Friedrich Wilhelm had the Cathedral choir sing the carol at his castle each year. In 1854, the king's court orchestra added it to its repertoire. The song became a beloved part of family festivities at Christmastime - and a fixture of Christmas church services. Its creator Joseph Mohr did not live to see the day. He died in 1848.

"Silent Night" enjoyed its triumphal march around the world with the release of the first foreign language translations. In 1873, it arrived in the USA under the name "Chorale of Salzburg," and by 1891, the song had made its way to England, Sweden and the British-controlled part of India. Christian missionaries took the Christmas carol to East Africa, New Zealand and South America. 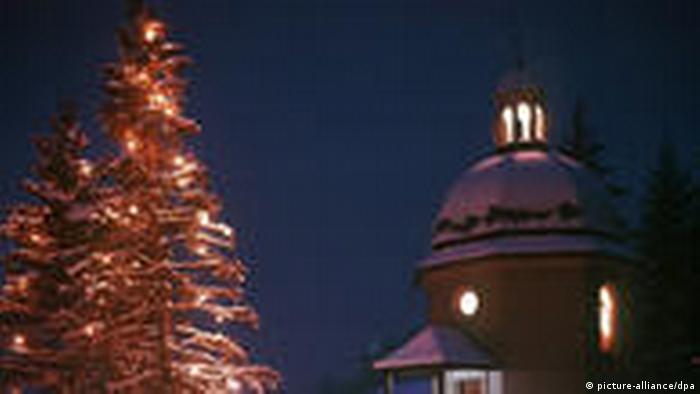 The 'Silent Night Chapel' in Oberndorf, the site of the song's debut

The worldwide success of "Silent Night" is likely not only due to its catchy lyrics and fitting melody, but also to a bit of an evisceration. Of the original six verses, just three - the particularly atmospheric ones - caught on internationally. Even in the current Protestant choir book in Germany has only three lightly revised verses - although ordered differently than in the original below.

Many in the English-speaking world know the words by heart, but we thought it might be interesting to look at the original. This direct translation, taken from the "Silent Night Society," aims "to provide the reader with a better understanding of the original German text."

The other three verses were largely forgotten. Here are verses three and five from the original version:

A fourth verse, explosive in its silence

That the fourth verse of Joseph Mohr's reflective Christmas carol makes a special assertion, which is made clear when one ponders the lyrics closely:

Here it's not just that sweet words are brought melodiously to life. Jesus, understood by Protestants as the son of God, is referred to here as a brother to mankind. That verse sounds like a veritable "Christian Internationale" - in reference to the famous song of the socialist movement. The poet's intention likely sounded strange to many at the time and was thus not passed on. Perhaps, after 1877, those lyrics became even more glaring due to the political movement in Germany at the time. The international socialist anthem includes a verse that goes:

There are no supreme saviors
Neither God, nor Caesar, nor tribune.
Producers, let us save overselves,
Decree the common salvation.

Who knows, perhaps the inclusion of Joseph Mohr's provocative verse could have helped ease exploited workers' fear of entering church doors. Theories still abound that socialism would have had less of a chance of taking hold among the masses and becoming a widespread political ideology had the Christian church acted in a more timely manner to care for the socially disadvantaged.

An international song of peace 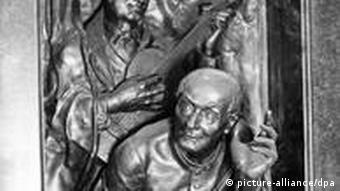 Another memorial to Mohr (front) and Gruber

In any event, in the 21st century, the first half of "Silent Night" remains a hit. The sentimental verses satisfy the needs of many for a sense of comfort and emotional security and add to a cozy, homey mood around the Christmas tree - something the originators likely were not aiming for. After all, they, as well as the song's first listeners, were bitterly poor people. The song gives comfort especially to those who take the song's core meaning to heart: "Christ the savior is born." That is the core message of the two-centuries-old carol by Joseph Mohr and Franz Xaver Gruber.

For the "Silent Night Society," which is dedicated to research about the song and is responsible for spreading all six of the verses worldwide, it goes a bit further. The society sees the song as a firm part of European festive culture. The "song for world peace" extends beyond the Christian Church and into other religions. In 2011, "Silent Night" was inducted to Austria's national list of UNESCO's intangible cultural goods.

Christmas in Europe? Germany's holiday markets quickly come to mind. After the attack on a market in Berlin, we look at the centuries-old history and meaning of Christmas markets for Germany. (20.12.2016)

During the Christmas season, sweet temptations like sugar-coated almonds and Stollen bread are more dangerously tantalizing than they look. (16.12.2016)