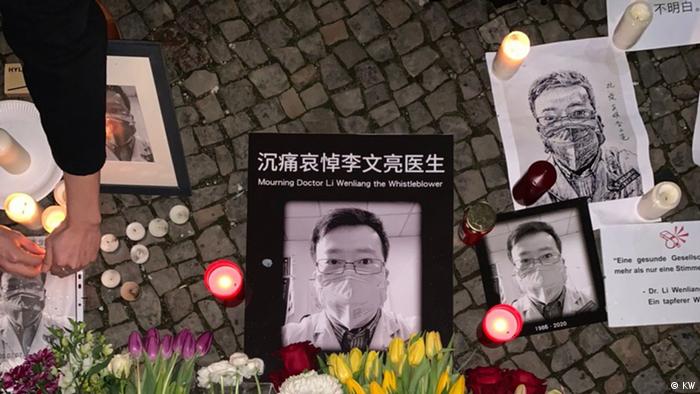 China has a new martyr. The 34-year-old ophthalmologist Li Wenliang was one of the first to warn about the coronavirus at the end of December, when he told fellow doctors in a group chat about a new pathogen. He was soon summoned by the local authorities, who accused him of making "false comments" and "disturbing the social order," and forced him to sign a statement agreeing to keep silent.

Li later shared the statement online: "We solemnly warn you: If you keep being stubborn, with such impertinence, and continue this illegal activity, you will be brought to justice—is that understood?"

Li's death on February 7 has provoked even more anger and furious calls for freedom of speech in China. Many have criticized the arrogance and authoritarian tone of the statement, in particular the question: "Is that understood?"

Many believe the virus could have been contained if Li had not been forced to sign this statement. Even though the authorities started isolating people as soon as the first case was discovered, many online commentators think they were kept in the dark for too long.

Never have internet users been allowed to criticize the authorities so openly in President Xi Jinping's China. But the country has a long tradition of using grief as an outlet for rage. In 1976, the death of Prime Minister Zhou Enlai triggered a call for reforms, and the 1989 death of Hu Yaobang, the former general secretary of the Communist Party, sparked widespread public mourning which developed into a student movement. The funeral processions allowed demonstrators to circumvent the ban on assembly. 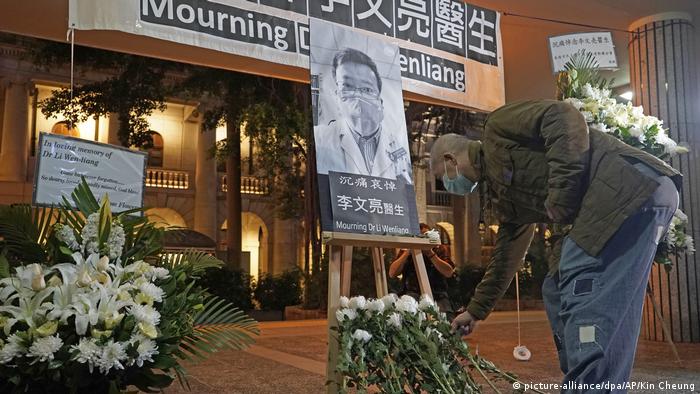 Li Wenliang, who left behind a child and a pregnant wife, was neither Zhou Enlai nor Hu Yaobong, but mourning for him has had a similar effect — at least online. He was not an idealistic whistleblower a la Julian Assange. He was not a dissident. He wasn't even political. He was simply a doctor doing his job. But as he became more ill, he began to speak more openly, even granting an interview to The New York Times.

"After I recover from the disease, I will work on the front line of the battle. The virus is still spreading, and I don't want to be a deserter," he told the paper. This modesty struck a chord with those mourning him today. After his death, Li's mother defended him and said he was not "the kind of person who would lie."

Mixed response from the state

Online posts criticizing the government have frequently been deleted, yet there are so many that the situation cannot simply be ignored. After a slight hesitation, state media has begun celebrating Li Wenliang as a hero, and the Central Committee of the ruling Communist Party has promised a "thorough investigation" into the case. Two high-ranking senior officials on the health commission in Hubei were fired to demonstrate the Chinese government's "determination."

Whatever they say, the authorities aren't likely to be believed as so many questions remain. What has happened to the seven other doctors summoned after the outbreak of the virus? What about the disappearance of a nurse and a journalist who filmed the situation?

Until late on February 7, the state media could not yet decide whether they should even announce Li's death, and contradictory reports ran for several hours.

Hu Xijin, the patriotic editor-in-chief of the state-controlled Global Times, later wrote an extraordinary commentary: "Wuhan indeed owes Li Wenliang an apology. Wuhan and Hubei officials also owe a solemn apology to the people of Hubei and this country," he wrote. He went on to say that if the authorities did not understand the severity of the situation at first, they could at least have admitted they were wrong later.

Hu also asked why no official had visited Li Wenliang when he became seriously ill and pointed out that since China is a People's Republic, people should be the focus of all economic and political activities. This is why society was so shocked about the case, he explained, adding that it was important to remember the man had done nothing wrong but had simply done his job as a doctor and warned of a dangerous virus.

'They know we know they're lying'

By Chinese standards, this is a very clear indictment and highlights the weaknesses of a system that is not transparent, a system where it is considered important to not do anything wrong, a system where the party decides what is right and wrong. However, the text also makes clear that there is at least a debate about the pros and cons of censorship in political circles.

Last year, Hu Xijin called for more pluralism ahead of celebrations for National Day. "This country is not fragile," he wrote in an online post. "I suggest society should have more access to the outside internet, which will benefit the strength and maturity of China's public opinion, scientific research and external communications, as well as China's national interests." He quickly censored himself, however, and deleted his post, saying he had just been making suggestions and did not want to cause any trouble.

This time, he is less afraid. But he is actually doing the Communist Party, for which his paper is a mouthpiece, a favor. Speaking to the people from his heart and yet not going over the top, he can get a feel for the atmosphere in the country. Hu is basically warning the party that there is something going on that, like the virus, cannot be ignored.

Perhaps this is the beginning of a debate about more transparency, pluralism and freedom of speech in Chinese society, a debate that people can participate in without immediately being suspected of wanting to overthrow the party and the system. This would be a huge step forward. One that Li Wenliang would have approved of.

Just days before he died, Li said from his hospital bed: "I think there should be more than one voice in a healthy society, and I don't approve of using public power for excessive interference.”

Perhaps it's time for the lying to stop.