The dog meat festival takes place once a year in Yulin in southern China. But even though it's a Chinese tradition, there are fewer and fewer takers for dog meat on their plates, says DW's Frank Sieren. 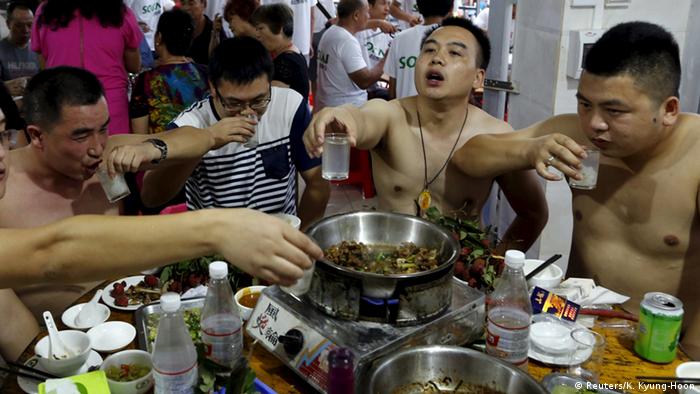 The Chinese are proud of their old traditions. For example, in Yulin in the autonomous region of Guangxi where dog meat is a delicacy that goes back 500 years, with people believing that eating it brings health and happiness. Dog meat is not put into food secretly here; it is an expensive delicacy. Every year, during the days around the summer solstice, the dog meat festival takes place in Yulin. According to animal rights activists, some 10,000 dogs - from St Bernards, which are called Swiss meat dogs in Chinese, to mixed breed puppies - are served up on the plates of festival visitors.

Dog meat gourmets are of the opinion that it makes no difference whether meat is lamb, beef or dog. But this an opinion that is finding less and less traction in today's China. More and more Chinese have dogs as pets. For them, it makes a big difference and one that is not less important than the centuries-long tradition. One could say that China is becoming more western in this respect. A pet should not feature on a menu.

The new rich are taking it almost to the extreme in the other direction. They treat their pets almost like people. This means expensive visits to the vet, as well as dogs getting their own bed in pet-friendly hotels when people are on business trips or on holiday. The Chinese travel platform Qunar expects 30,000 hotels to be able to cater for both dogs and their masters in the coming years.

In 2012, in Beijing alone, dog owners registered over a million pets with the authorities. Ten times more than 20 years ago. So the future is looking better for those who make dog food than for those who sell dogs as food. Dog food sales are set to triple to 760 million US dollars by 2019.

The hunt for stray dogs

Dog owners and animal rights activists fear that the dogs slaughtered served up in Yulin are not only purpose-bred dogs as sellers of dog meat have maintained in the past, but stray dogs that have been hunted ahead of time. Some of the dogs in the cages still wear collars.

Five hundred dogs were lucky this year after being bought by a prominent animal rights activist who paid 10,000 yuan (1400 euros) to save them from the chop. Last year, she rescued 360 dogs from death.

However , even if China's urban population is not so keen on it, the dog meat festival in Yulin will continue to take place for some time yet. Dog meat is not forbidden in China. Dog meat aficionados continue to defend themselves bravely, saying: "When you stop eating beef, we'll stop eating dog."

China is struggling with huge environmental problems, but there is also progress. DW columnist Frank Sieren thinks that the West should acknowledge this, instead of only painting apocalyptic scenarios. (22.06.2015)

Sieren's China: Lamenting in the lap of luxury

European companies are less concerned about the recent economic downturn in China than it would appear at first glance, writes DW columnist Frank Sieren. (19.06.2015)

Myanmar's opposition leader Aung San Suu Kyi was given a grand reception in China. Her country is of such stragegic importance to China that ideological differences take a back seat, observes DW-columnist Frank Sieren. (16.06.2015)