German industrial company Siemens AG has received a 750 million euro (US$1 billion) order for its share of a contract to deliver 100 high-speed trains to China. 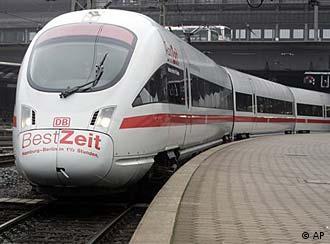 Siemens will adapt its ICE model for China

"Siemens has secured five of the last six contracts on the high speed rail market over 300 kmh (188 mph)" in China, the Munich-based conglomerate said in a statement on Friday, March 20.

The first trains for the new Bejing-Shanghai route will be operational by late 2010.

"(The deal) strengthens our long-term partnerships in what will be the biggest high-speed train market in the world," said Siemens executive Hans-Jörg Grundmann in Erlangen on Friday. 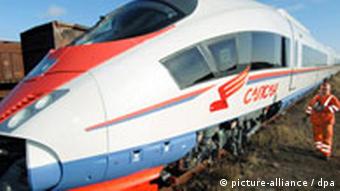 Russia is another Siemens client

The company will supply components for the Velaro trains, which will be assembled in China.

The Velaro is a development of Siemens' successful ICE model used in Germany and has a total length of 400 meters, making it world's longest single train used in high-speed transportation.

The trains would run at 350 kmh (218 mph) and make the 1318-kilometer (825 mile) run from Beijing to Shanghai in four hours. The Chinese trains will comprise 16 cars and carry around 1060 passengers each.

According to Hans-Jörg Grundmann the order was especially important because it meant supplying the first trains for a line from Beijing to Shanghai. "(This is) the most important high speed line in the country," he said.

China plans to create the largest high-speed network in the world, Siemens added, and future connections between Wuhan and Guangzhou, and Wuhan and Shijazhuang would also use Siemens' Valero trains.

"Altogether, the network of these lines will cover a total distance of approximately 16,000 kilometers (10,000 miles) by the year 2020," the statement said.

Siemens has already delivered 11 high-speed trains to China out of an earlier order in 2004 for 60.

China is not the only client. Trains based on the Valero design already operate in Germany and between Madrid and Barcelona in Spain, while Moscow and Saint Petersburg are to be connected with a Russian version at the end of this year.

Despite the overall financial gloom, German engineering giant Siemens got off to a good start in the new year. The company reported an earnings increase Tuesday, Jan. 27, while expressing a bit of cautious optimism. (27.01.2009)

German engineering giant Siemens announced Tuesday, July 8, it will cut almost 17,000 positions from its global workforce in an effort to streamline operations amid a worsening business climate. (08.07.2008)