French police have shot a knife-wielding man outside a police station in northern Paris on the first anniversary of the Charlie Hebdo attacks. The man died at the scene. 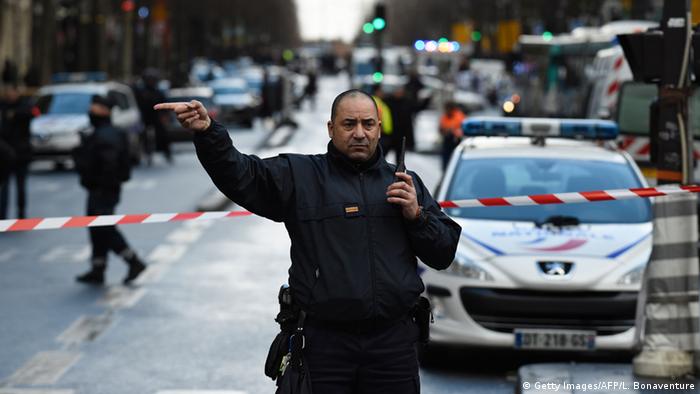 According to early reports, the man tried to force his way into the police station in a northern Paris neighborhood while armed with a knife.

"On Thursday morning, a man attempted to attack a policeman at the reception of the police station before being hit by shots from the police," interior ministry spokesman Pierre-Henry Brandet told reporters, adding that Interior Minister Bernard Cazeneuve had left for the scene.

An eyewitness told the French AFP news agency that "two or three shots" were heard on the scene.

Interior ministry spokesman Brandet said that bomb disposal experts had been sent to the scene to work on securing the site. Initial findings revealed that the alleged assailant was wearing a fake suicide belt. 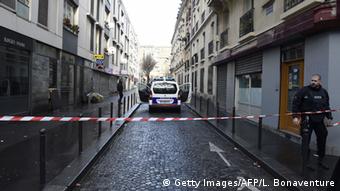 The area around the police station was sealed off, as bomb disposal experts arrived on the scene

"The man did have a belt, but it was a fake. The bomb-disposal unit confirmed it was a fake," an employee for the police union told Reuters news agency on the condition of anonymity.

Luc Poignant, a police union official, said the man had shouted "Allahu Akbar" (Arabic for "God is great") as he tried to enter the police station. Another official told the Associated Press that Paris police were investigating the incident as potential "terrorism."

The police station on Rue de la Goutte d'Or in Paris's 18th arrondissement was cordoned off alongside surrounding areas including the Rue des Islettes near the Barbes-Rochechouart metro station. The area is known for having a high crime rate.

The incident took place on the first anniversary of the 2015 Islamist militant attacks on the Charlie Hebdo satirical magazine in the French capital. On November 13, 2015, suicide and shooting attacks killed 130 people in coordinated massacres across the city.

News of the attempted attack came after French President Francois Hollande addressed New Year's greetings to France's police and gendarmes, calling for greater cooperation between the security services and tougher laws on organized crime and terrorism.