Surveys have shown that more and more German companies are reintroducing short-time work to cushion the impact of a creeping economic slowdown. That policy tool had worked miracles during the global financial crisis. 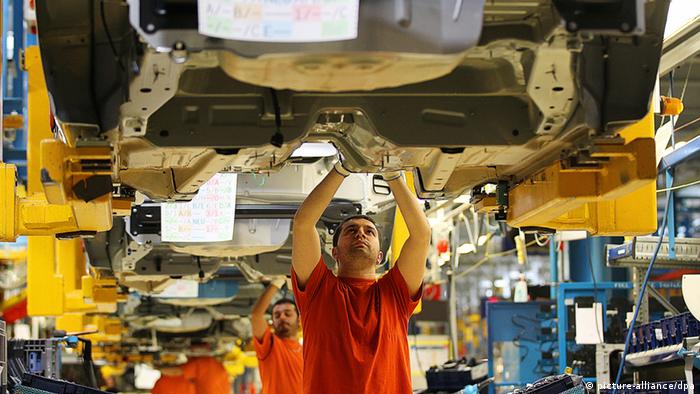 German research institute ifo said Thursday that a growing number of industrial firms in Europe's largest economy were resorting to or at least planning to make use of larger short-time work programs.

A survey conducted by the Munich-based think tank says that 8.5% of companies in Germany's manufacturing sector expect to introduce short-time work over the next three months, the highest percentage since 2013. A year ago, ifo notes, only 2.6% of firms in that sector were considering putting employees on shorter working weeks.

"The economic slowdown is gradually having an effect on the labor market," said Timo Wollmershäuser, who heads ifo's Economic Forecasts division. "German industry has been in recession since the middle of last year, and short-time work is the method of choice when companies want to retain their skilled workers despite difficult economic times."

'The method of choice'

According to Germany's Federal Employment Agency (BA) in Nuremberg, there were about 44,000 people on shorter working weeks in April, while a year ago only 13,000 were affected.

When Wollmershäuser talked about "the method of choice," he will no doubt have recalled the use of short-time work as a policy tool at the peak of the global financial crisis.

It's fair to say that Germany was hit hard by that crisis, if a 4.7% percent decline in the nation's gross domestic product in 2009 is anything to go by. That slump was thus twice as strong as the drop in GDP recorded in the United States in the same year.

One of the major reasons — if not the major reason — for the recession back then not ending up in a massive job cull was the unprecedented expansion of short-time work programs especially in the manufacturing and service industries across the nation.

As a result, the number of people receiving state subsidies for a temporary reduction in working hours increased tremendously and peaked at about 1.5 million in 2009/10.

At the beginning of the 2009 crisis year, most analysts predicted the number of jobless people to rise from 3.2 million to at least 5 million within a year.

The miracle that came true

"It would take a miracle to prevent us from heading in the direction of 5 million unemployed," Berlin-based economist Michael Burda said at the time. But the jobless numbers never came close to 5 million, with short-time work and other policy tools keeping employment figures stable in the crisis years.

The length of time the wage supplement was paid changed a couple of times to reflect economic developments. From an original six months of providing top-up money, the period was gradually increased to 12 months, then 18 and finally 24 as of May 2009, before going down again as the economy recovered gradually.

In Germany, part-time work has been seen as a blessing by workers who would otherwise not keep their jobs. But it's also a boon for employers, because even when the economy struggles and demand drops, companies can at least make sure the bulk of the workforce doesn't have to leave.

This means firms don't have to pay dearly for finding and training new staff when things get better. In addition, employers don't have to grapple with costly severance payments and claims over unfair dismissals.

That strategy worked well for Germany a decade ago, and labor market experts expect it to work well again in the current economic environment.

Germany's Bundesbank has cut its projections for economic growth in 2019, citing "lackluster" exports. It said both growth and the inflation rate in the eurozone's biggest economy were currently facing risks. (07.06.2019)