Shipbreaking: ′Recycling a ship is always dangerous.′ | World| Breaking news and perspectives from around the globe | DW | 30.12.2014

Young Bangladeshi shipbreaker Alamgir puts his life at risk every day. Patrizia Heidegger, of NGO Shipbreaking Platform, tells Life Links how it is trying to help people like him get better working conditions. 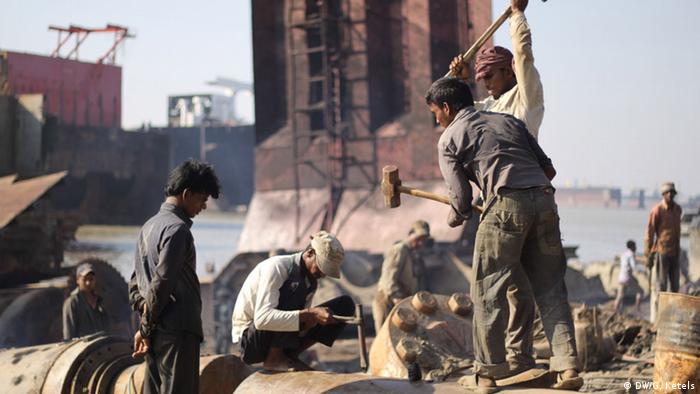 After filming with Alamgir, a young Bangladeshi shipbreaker, our reporter Gönna caught up with Patrizia Heidegger, executive director at the Brussels-based Shipbreaking Platform. The NGO is a coalition of environmental, human and labor rights organizations and aims at preventing “toxic end-of-life ships from being beached in developing countries”.

When I was filming for #headabovewater in Bangladesh, shipbreaker Alamgir told me his working conditions have worsened over the past few years - despite a labor law dealing with working conditions and health and safety. There is even legislation on safety standards in the shipbreaking yards. But from what I’ve seen these laws are clearly not enforced. Why is that?

Patrizia Heidegger: Bangladesh went through a political crisis with a long period without elections and with political unrest. This has led to weaker law enforcement and less well-functioning authorities.

The authorities in charge of enforcing the law don’t have the staff or the money to do their jobs properly. There might be just one person who has to check on hundreds or even thousands of factories and who might not even be specialized in shipbreaking, but also has to monitor textile factories and other industries.

What makes the job that Alamgir does so dangerous?

Recycling a ship is always dangerous, even if it’s done in a modern ship-recycling facility. In the end, it’s always human beings who have to cut down a huge structure. But it’s particularly hazardous in Bangladesh where ships are broken down on a beach.

While a ship is on the beach, the companies cannot use any cranes or heavy lifting equipment, so the steel parts are just cut and they fall down. That’s one source of accidents. Often, workers are also hit by falling steel parts or they’re crushed underneath. We also see workers falling from great heights from the top of the ship. They often work in confined spaces, inside tanks, where there are toxic gases that can suffocate workers or cause explosions.

Shipbreaker Alamgir: "I'm not scared of death or any accident. Fear kills a person."

And then there are a lot of hazardous materials in the structure of the ship that have to be taken out when the ship is scrapped. The workers are exposed to these materials without wearing proper protective equipment. So, for example, a worker will take out asbestos with his bare hands and he will breathe in the asbestos fibers.

Alamgir is about 20 years old now. For how long will he be able to do this job?

Most of the workers are in their twenties or thirties. There are usually no workers that are much older. One reason is that the work is very hard. It’s work that makes you tired and sick at a very young age. A trade union that represents the shipbreaking workers in India has argued in a study that the life expectancy of a shipbreaker is 45 years old, which is nearly 15-20 years less than the general life expectancy.

If you survive the job, the question is: how will you earn your money when you get a little bit older and when you’re less fit? There is no provision for that, no pension scheme. Those workers will most likely have to send their children to the shipbreaking yard also, because they will not have another source of income.

Many people are not even aware that shipbreaking as an industry exists. How many ships end up in shipbreaking yards?

In the past few years, it’s been between 1,200 and 1,300 large oil tankers, container and passenger ships that are demolished every year. More than 600 of these were sent to the beaches in South Asia for breaking. In recent years, the number of ships that have been sold for demolition has been growing constantly.

You can easily earn several hundred thousand euros or even a million euros by dismantling one ship. With the number of ships coming in every year, we are talking about substantial amounts of money.

Around Chittagong, the shipbreaking companies are a major economic force and they are linked to some of the most influential companies that operate in all different kind of activities in Bangladesh, including the steel industry, construction and real estate.

That’s another reason why it’s so difficult to regulate what they are doing because they are very well linked to power structures in parliament, in the government, and also within local authorities. For example, the local member of parliament and the mayor of Chittagong own shipbreaking yards.

What are alternative and safer ways of disposing of ships?

There are modern ship-recycling facilities in different countries around the world, for example, in Turkey or China. They use a ship-recycling facility including a crane and lifting equipment. They will have equipment to remove hazardous waste, water treatment plants, waste treatment facilities in the vicinity, a landfill, and health and safety procedures for the workers.

However, the majority of ship owners are not willing to compromise on the profit they get from selling their ships and they prefer going to the place where they can get the highest price.

In Bangladesh, they don’t have to follow environmental protection law, waste law or labor law. Everything is cheap. And that is why most of the ships go there.

How likely is it that Alamgir's situation will change?

Laws that ban the export of ships to developing countries exist and it’s clear that end-of-life ships are covered by them and that they are considered hazardous waste under international and European environmental legislation. Unfortunately, EU member states have never decided that they should hold the ship owners in Europe accountable. So, once a ship has left Europe the authorities can’t do anything.

If we can achieve that more ship owners demand clean and safe recycling, that would have an immediate effect on the working conditions. But it will also depend on whether the government in Bangladesh will do more to make sure that basic labor rights, including workers health and safety provisions, are implemented. It’s very difficult to say, especially with the political situation in Bangladesh, whether this will happen any day soon.

“My heart was broken at the beginning of my life.”

Every day, around 20,000 workers risk their lives in the shipbreaking yards of Chittagong, Bangladesh. Alamgir, who we meet in #headabovewater, is one of them. Earning a living makes him proud - and sad at the same time. (29.12.2014)