The name Shaka Zulu has become synonymous with battle. His army devastated anyone who stood in his way. DW spoke to historian Maxwell Shamase who says Shaka's legacy has been misrepresented.

A lot has been said about Shaka Zulu. When it comes to sorting fact from fiction, Doctor Maxwell Zakhele Shamase is an authority. Together with Mthandeni Patrick Mbatha, the historian from the University of Zululand is currently writing a book about the man behind the legend.

DW: Why write a book about Shaka Zulu?

Maxwell Shamase: There is very little that has been written about King Shaka from the African perspective. Some of the things written by non-Africans are factually incorrect. We want to tell the story from an African position.

How would you describe King Shaka?

Before Shaka was born, a prophetess by the name Sithayi, prophesied that ‘a child will be born who will bring about a new order and a new nation.' He was a military genius in Africa. He was a nation builder and not a blood thirsty killer. He was not a ruthless assassin.

When and where was Shaka born?

He was born in July 1787 among the eLangeni people where his mother originated from.

Where did Shaka Zulu get his name?

His father was Senzangakhona. His mother was Princess Nandi of the Mhlongo royal family who lived at a place called eLangeni. The name Shaka originated from a disease called ‘ishaka.' This disease caused women bodies to be sore, lazy and to bulge. When his mother, who was not married at the time, became pregnant, people thought she was suffering from ishaka. This is how Shaka got this name.

So, he was Shaka kaSenzangakhona, with Senzangakhona being his father. In those days your father's name became your surname. Shaka's grandfather's name was Zulu. When he became king, Shaka said, let us have an identity and call ourselves Zulu people. He was the first to call his people ‘Zulu people', hence he is known as the founder of the Zulu nation despite the fact that he inherited an already existing throne. 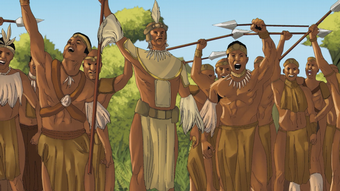 He tried to deny it because he was afraid of his father, King Zulu. For a heir apparent like Senzangakhona to impregnate a girl before marriage was an embarrassment and could attract harsh punishments including losing his right to ascend to the throne. His family later owned up and Senzangakhona paid the bride price which enabled Nandi to move into Senzangakhona's family.

Nandi and Shaka were later thrown out of Senzangakhona's place. How did it come to this?

Nandi was arrogant and had a tempestuous character always dictating to everyone. So, theirs was a rocky relationship. Senzangakhona could not take it anymore. He threw her out together with Shaka. They both wandered around. Nandi then met Ngwati. They fell in love and stayed together and gave birth to Shaka's sister.

While Ngwati was killed in pursuit, Nandi and her two children were taken up by the Mthethwa king Dingiswayo. How did Shaka then join the Mthethwa regiments or army?

He became King Dingiswayo's senior headboy when he was 16. This was because of his intelligence and courage. It was not long before he was recruited as a warrior joining the Izicwe regiment.

What impact did Shaka Zulu have in the Mthethwa army?

As a commander, he stopped the warriors from wearing sandals and ordered them to walk bare-footed. He also stopped the use of long spears which warriors would throw at the enemy. Instead, he introduced short spears ‘Iklwa' for close combat. This forced his warriors to get close enough to stab the enemy and move to the next using the same spear. He also introduced the buffalo horn formation which his army used to trap their opponents before descending on them. It resembled the head of a buffalo and its two horns. He became so feared and well known even in other tribes and kingdoms that he earned the name 'Nodumehleli' which means the one who when seated causes the earth to rumble.

It was as a Mthethwa warrior that Shaka finally ascended to Senzangakhona's throne. Did this act go uncontested?

When his father Senzangakhona died, King Dingiswayo assisted him to return to his father's people, giving him two warriors to help him take over power. But Senzangakhona had told his prime minister Mudli, that his other son Sigujana was the heir apparent, not Shaka. On arrival he killed Sigujana and in 1816 took over as King. After King Dingiswayo died, Shaka incorporated the Mthethwa people under his kingdom and the clans that Dingiswayo had conquered under Shaka's military leadership. He went on to conquer other clans and ruled them.

Shaka held a very negative view towards marriage, to an extent some people say he might have been homosexual. What was the reason for this?

The negative attitude towards marriage came from the way he saw his mother being treated. He also got bullied a lot as a result of growing up outside his clan and without his father. He did have sexual intercourse with women but when they got pregnant, he gave them to his brother, Mpande, seen as a weakling.

Did Shaka Zulu really kill women that he impregnated, as it is purported?

That could not have been true. We know of an incident where the white traders resuscitated a woman who had collapsed because of high fever. Shaka and his people thought she was dead. They treated her resuscitation as a resurrection. Shaka became curious and wanted to ascertain if for a fact, the traders were able to raise the dead. He ordered a woman to be killed and asked the traders to demonstrate their power to resurrect her which of course they wouldn't do. At some stage, because of curiosity, we are told he ripped the belly of a pregnant woman to see how the baby was growing in the tummy.

We are told Shaka killed up to a million people, some of them for nothing or for just being too short. Is that true?

That is a western view and not true. Remember, 50 million people died in the second world war in addition to other millions who died in the first world war. So, who was worse between Shaka and these Europeans behind the first and second world war? However, killing in this case should be taken in the context of that time. It is something people were used to. He would provide justification for the killing. For example, those proven to be witches were killed. Kings at that time survived by eliminating their rivals.

How did Shaka Zulu die?

He was killed in September 1828. There was a conspiracy led by his aunt. The main reason was that after the death of his mother Nandi, Shaka became psychotic and killed a lot of people without a second thought under the guise of mourning his mother. Some he killed for bullying him during his childhood, while others were killed for not showing enough grief.

Is it problematic to call Shaka 'a Black or African Napoleon'?

He was an African military genius not a black Napoleon. Why not say Napoleon was a white Shaka? He never went to Europe and no European taught him the things that he did in terms of warfare. It was out of his own genius.

He is the rallying point behind Zulu unity. The Inkatha Freedom Party that dominates Kwazulu Natal identifies itself with King Shaka as their foundation. The Zulu Kings and people pay homage to King Shaka's throne to this day.

Zulu history expert Maxwell Zakhele Shamase, holds a PhD in History – Contemporary Politics and history of the Zulu people, history of the region of Kwazulu Natal people. He is currently writing a book on King Shaka. H Shamase is also a lecturer and Head of Department in the Department of History at the University of Zululand also known as Unizulu University.

When Tanzania became an independent state, it was Mwalimu Julius Nyerere who was hailed as its founding father. But without Bibi Titi Mohamed, he would have lacked an important mobilizing force that secured his success. (18.04.2020)