Rescuers in Nicaragua have reportedly brought to safety several of the some two dozen freelance miners trapped in a gold and silver mine. The whereabouts of up to five miners remains unknown. 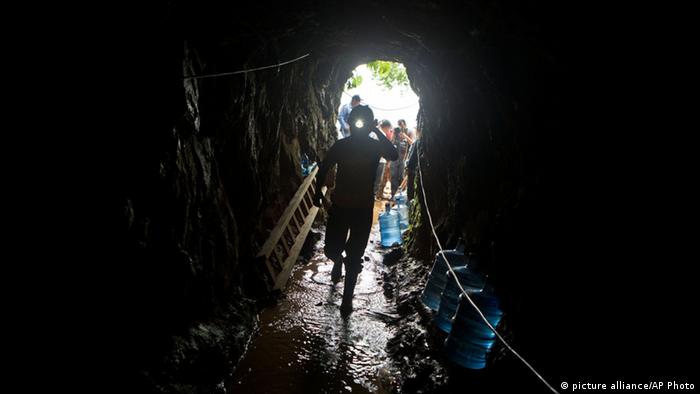 First Lady Rosario Murilo, the government's official spokeswoman, said on Friday that 20 of the at least two dozen miners trapped in the El Comal mine in the northeastern town of Bonanza had been rescued.

"We give thanks to God our Lord and the Virgin Mary for having saved from death 20 artisanal miners," she said.

Earlier, Interior Vice Minister Carlos Najjar had said 11 of the miners had been rescued.

Najjar told state television that the miners were a little dehydrated, but in good health.

The miners, whose number has been variably put at between 24 and 28 in different reports, had been working in the shaft on Thursday morning when a landslide triggered by heavy rain caused the mouth of the mine to cave in.

Two workers buried near the surface had managed to dig their way out, according to the local disaster prevention committee.

The informal miners, known as "guiriseros" descend into disused shafts that have been abandoned by conventional mining companies to look for any gold left over, sometimes digging deeper to find new veins.

A spokesman for the company Hemco that runs the mine told the AP news agency that miners had been warned about the danger of working in the El Comal area, where two miners died in a landslide last month.

The miners had been allowed to work in the company's concession on condition that they sold any gold they found to Hemco, Gregorio Downs said.

Some of the informal miners work independently, while others belong to officially authorized cooperatives.

Officials estimate that there are 6,000 "guiriseros" living in Bonanza, where informal mining is the main source of employment amid a modern-day gold rush.

Sulfuric acid is used to leach copper from the ground. But the method comes with considerable risks for the environment because of contamination issues. (12.08.2014)

Mexico has opened its oil, gas and electricity industries to foreign and private companies. President Enrique Pena Nieto's action follows congressional approval of the rules for production and profit-sharing contracts. (11.08.2014)

Rescue workers are trying to reach at least two dozen workers trapped inside a gold mine in Nicaragua. The miners are thought to have been trapped for more than 24 hours. (30.08.2014)