Clashes and protests have disrupted voting in many districts of Nigeria's southern oil-rich Rivers state. The elections will choose state governors, some of the most powerful politicians in the West African country. 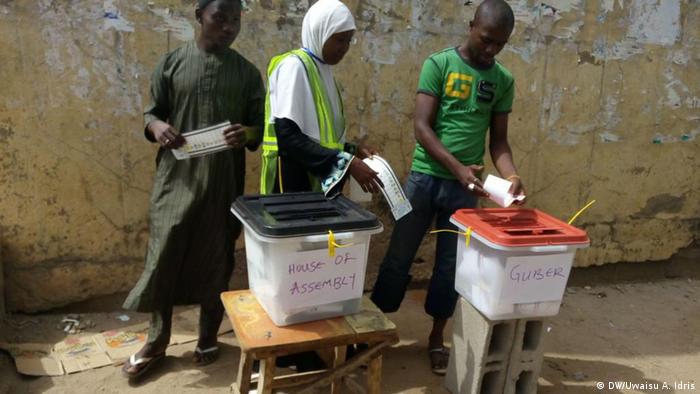 At least nine people have been killed as Nigerians voted for state governors, their deputies and local assemblies on Saturday. Most of the violence was reported in the fiercely contested Rivers state, Nigeria's oil hub.

"A lot of gunshots in the air as I speak to you, but the military is trying their best to bring the situation under control," Livingstone Membere, president of the Kalabari Youth Federation told The Associated Press, from Asari Toru area in Rivers.

Membere also said a polling station was burned down, along with the house of the state commissioner for women's affairs.

Eight youth corps polling agents were kidnapped Saturday morning, and police had only succeeded in rescuing four of them by afternoon, an electoral official told news agency AP, on condition of anonymity.

In addition, a crowd of some 2,000 protesters delayed distribution of materials in the state capital Port Harcourt, causing the ballots to open hours later than planned.

Struggle at the top

In another election battleground, the Nigerian city of Lagos, members of Igbo ethnic group have filed a complaint with the National Human Rights Commission after the king of the Yoruba tribe allegedly threatened to kill them if they did not vote for his opposition candidate.

The opposition coalition All Progressives Congress currently holds 14 states, while Goodluck Jonathan's Peoples Democratic Party has 21. However, Jonathans party has suffered many defections since he lost the presidential election to Muhammadu Buhari two weeks ago.

Trouble for the African giant

State governors are among most powerful politicians in Nigeria, and often control budgets larger than those of many individual countries.

However, the most populous African nation remains burdened by corruption and torn by Boko Haram uprising, with the jihadists allegedly killing 10,000 people last year alone.

Results of the state governor and assembly elections are expected to start coming in on Sunday. The new governors will take office on May 29, alongside president-elect Buhari, a former military dictator.

Nigerians return to the polls for gubernatorial elections, two weeks after the opposition won the presidential race. The city of Lagos drives the country's economy and has been opposition-controlled since 1999. (10.04.2015)