Serious accident on live TV prompts debate over risks | Europe | News and current affairs from around the continent | DW | 06.12.2010

After a contestant was seriously injured in a live stunt on a popular German TV show, there are questions about the level of risk employed to push up viewer ratings. The injured man could be paralyzed, doctors say. 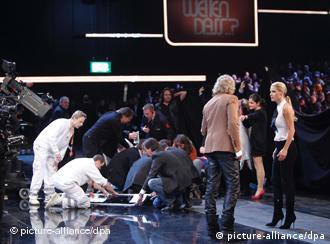 Critics have questioned the level of risk - and the push for ratings - that meant one of Germany's most popular television programs had to be pulled off air when a contestant was seriously injured. 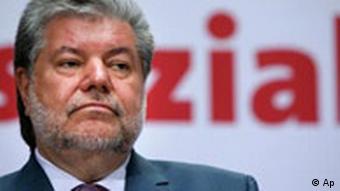 Koch was injured while taking part in the popular family show "Wetten, dass…?" ("Wanna bet?"), aired by public broadcaster ZDF. He attempted to jump over five oncoming cars using spring-powered stilts live on air. However, he was struck by the fourth vehicle he attempted to clear, and was left motionless and face-down on the floor.

Questions have now been raised over the evaluation of risks posed to participants, who carry out daring feats - the outcome of which is betted upon by celebrity guests.

"We have to talk about certain issues," said Kurt Beck, chairman of ZDF's governing body. "When was the boundary of responsibility crossed? How much risk should be involved?" said Beck.

Present as an eyewitness at the event, Hannelore Kraft, the president of Germany's upper house of parliament the Bundesrat, expressed her reaction at what had happened to Koch.

"I was shocked and upset and then I prayed," she told the German daily newspaper Rheinische Post's Monday edition. "We all worry with his family and hope that he gets well again soon," said Kraft, who is state premier North-Rhine Westphalia, where the accident took place.

German daily and Sunday newspapers were awash with commentaries in response to the accident.

Not so family friendly

The Rheinische Post asked if the show could still really claim to have a family-friendly format.

"Since Saturday evening, finally, parents have to think seriously about whether Wetten Dass…? represents an appropriate format for children." 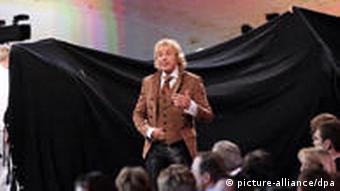 "It was not really foreseeable that many children would be watching as a contestant sustained life-threatening injuries but there has always been an element of risk surrounding the program."

'Is this public broadcasting?'

The Braunschweiger Zeitung said that television in which such risks were taken to increase viewer ratings did not perform a broadcasting role.

"If the publicly-funded organizations chase ratings so senselessly, why do we need publically financed television?" the newspaper asked.

The Frankfurter Rundschau was a little more philosophical in its interpretation of events.

"For ZDF, with its desire to produce family entertainment, the accident is a disaster. However, for viewers and potential copycats, this accident filmed live on camera also carries an important lesson. It is not possible to dabble with extremes without danger."

Pop act Take That and teen heartthrob Justin Bieber had been due to appear on the show, which was taken off the air shortly after the accident. Koch had been using special jumping devices known as "powerbocks," after their German inventor Alexander Boeck, to jump over the cars.

A popular German TV show had to be taken off the air on Saturday night after a contestant suffered a serious injury live on air. The man has since undergone an emergency operation and was put in an artificial coma. (05.12.2010)

Coming up Next on Global TV: Lots of German Formats

A record 13,500 participants from 105 countries are in Cannes this week for the annual MIPCOM audiovisual trade fair that runs through Friday. And as sales show, German TV formats are holding their own internationally. (10.10.2007)