Demonstrators in Serbia have held the biggest anti-government rally in years calling for early elections. The crowd protested corruption and economic hardship in the EU applicant country. 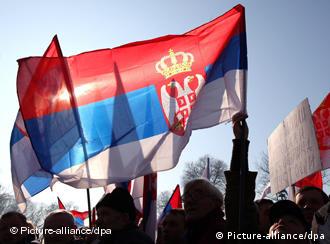 At least 50,000 attended the peaceful protests

Tens of thousands of opposition demonstrators took to the streets in Belgrade on Saturday to protest economic hardship and corruption, and demand early elections.

The rally was called by the nationalist Serbian Progressive Party (SNS), the strongest among the country's opposition bloc.

"We give them two months," SNS head Tomislav Nikolic told the crowd, vowing to stage continued protests if the government would not yield to the opposition's demands. He said the popular uprisings in Egypt and Tunisia had sent a message to governments around the world to listen to the demands of their people.

According to police, some 50,000 people attended the peaceful protests, while local journalists put the number as high as 70,000. The SNS had organized free bus and train transports so that people from all over the country could attend the demonstration.

The center of Belgrade had been blocked by the police to make way for the rally, and authorities were able to successfully prevent a group of football hooligans from clashing with the protesters. 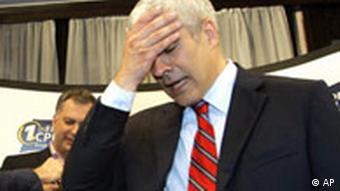 Demonstrators are calling for Tadic to go

Since 2008, Serbia has been governed by a pro-EU coalition under President Boris Tadic, but the slow accession process and continued economic difficulties have left many in the country disenchanted with the government in Belgrade. Parliamentary elections are due in 2012.

Inflation reached 10.3 percent in 2010 - one of the highest inflation rates in Europe. The average monthly income is around 390 euros ($535) while a majority of the population in rural areas is estimated to earn even less.

In January, the government announced a price increase on controlled items like heating, public transport and basic food like milk, sugar, meat and flour - adding to the popular discontent.

Teachers went on strike last month and were joined by the country's independent police union. Doctors, nurses and pharmacists have also threatened to go on strike.

A suspected Serbian war criminal has been held in German custody for weeks, while his co-accused went on trial in Belgrade. He is appealing against his extradition. (25.12.2010)