Sepp Blatter has spoken about Franz Beckenbauer's statements on the 2006 World Cup affair. The suspended FIFA president does not believe Beckenbauer to be telling the truth. 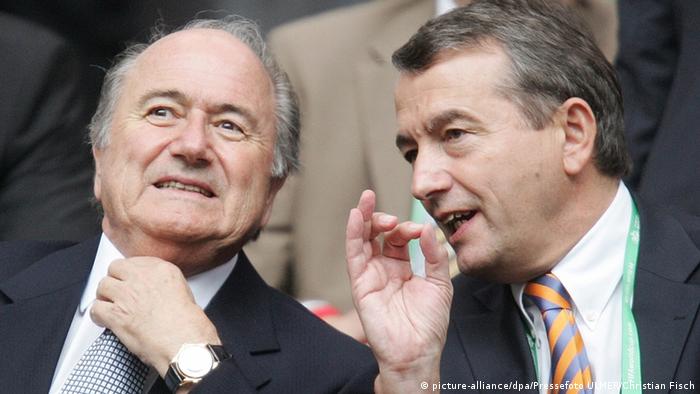 Suspended FIFA president Sepp Blatter describes a claim by Franz Beckenbauer over a payment to football's governing body in connection with Germany's hosting of the 2006 World Cup as "absurd".

Speaking in an interview published on the website of the German news magazine "Spiegel" on Friday, Blatter said there were "no conditions" made by FIFA for a grant to Germany's World Cup organizers. "To pay money to receive money? No, you don't have anything like that at FIFA," said the 79-year-old.

Beckenbauer, who headed Germany's World Cup organizing committee, has said he agreed to make a payment to FIFA in 2002 in return for funding for the 2006 World Cup.

Just a slice of the affair

Even at the end of October, Blatter made similar noises about a payment. "I never demanded money from Beckenbauer, never in my life and not from the German FA (DFB) either. It's just not true," Blatter said to Swiss newspaper "Schweiz am Sonntag."

Former Adidas chief Robert Louis-Dreyfus, who died in 2009, is believed to have loaned a sum equivalent to 6.7 million euros to the German organizing committee for the payment.

The DFB is investigating the repayment of the sum, which was transferred to FIFA in 2005 and declared as a contribution for a FIFA gala event that never took place.

Two former DFB presidents, Wolfgang Niersbach (who resigned on November 9) and his predecessor Theo Zwanziger, as well as former DFB secretary general Horst Schmidt, are under a tax evasion investigation ordered by Frankfurt prosecutors in connection with the 2005 payment.

Germany's Adidas has reported a surge in quarterly profit and revenue, indicating that it has not suffered from the corruption scandal engulfing soccer's governing body FIFA. Teh firm raised its full-year outlook. (05.11.2015)

Almost a week after a newsmagazine claimed that German football officials used illicit payments to land the 2006 World Cup, the DFB's president has again denied the allegations. But many questions remain unanswered. (22.10.2015)

The name of the former Bayern Munich and Germany legend was on a list of FIFA officials facing adjudicatory chamber scrutiny. FIFA also said it would try to limit Michel Platini and Sepp Blatter's suspensions to 90 days. (21.10.2015)