Government critic Ousmane Sonko was charged with rape but then freed from detention as police clashed with protesters in Senegal. 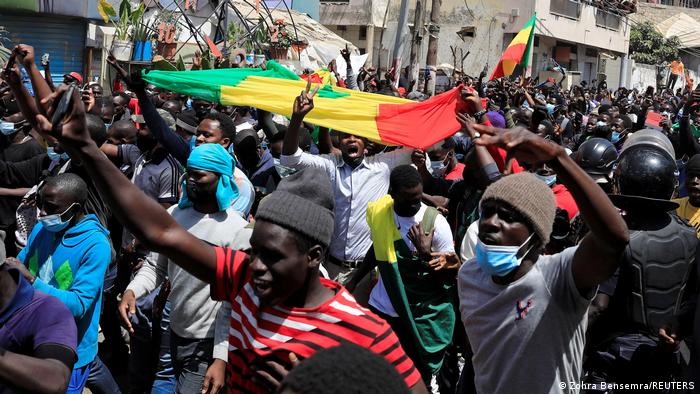 Senegalese authorities charged opposition leader Ousmane Sonko with rape and then freed him from detention pending an investigation on Monday, after his arrest last week sparked deadly protests.

Several people, including a child, were killed in nationwide clashes that followed the arrest of Sonko, a government critic who is popular with the country's youth.

Even as the 46-year old was released, new clashes erupted between security forces and crowds gathering in anticipation of his arrival.

Amnesty International says at least eight people have died since the violence broke out last week in Senegal's capital, Dakar. The judge freed the opposition leader from detention, but also formally charged him with rape, and the police investigation into the charge is expected to continue.

Sonko called for "much larger" anti-government demonstrations, but urged that they be peaceful.

'The conspiracy has failed'

"The conspiracy has failed. Our client will go home,'' attorney Cire Cledor Ly told reporters. "We have had this result thanks to the mobilization of the people.''

Opposition supporters, who had gathered in central Dakar waving Senegalese flags on Monday morning, pushed past police lines and entered a yard in front of the courthouse after his release was announced.

Police lined the streets of the capital, after an opposition collective known as the Movement for Defense of Democracy called for three days of massive demonstrations over the weekend.

Sonko is widely seen as President Macky Sall's greatest potential political challenger in the upcoming 2024 election, and the protests that began last week have been pushed forward by broader, long-standing grievances with Sall's administration.

In the 2019 presidential ballot, Sonko finished third with just over 15% of the ballots cast and earning strong support from younger voters. However, his message of greater economic independence for Senegal has since attracted a wider audience amid the financial hardships of the COVID-19 pandemic, curfews and other movement restrictions.

The week's clashes have marked some of the worst unrest in Senegal in nearly a decade. In recent days, crowds have set fire to several supermarkets and gas stations. Protesters also torched cars, looted shops and threw stones at police. Meanwhile, schools in the capital have been ordered closed for a week.

Macky Sall on Monday addressed the nation for the first time since the turmoil began. He said he understood why young people went out to the streets.

"Because you don't have a job, because you aspire to a better future," he said in a televised speech, pledging more funding to support employment and entrepreneurship.

Sall also promised to shorten an unpopular pandemic-related curfew, saying he will "support a return to calm."