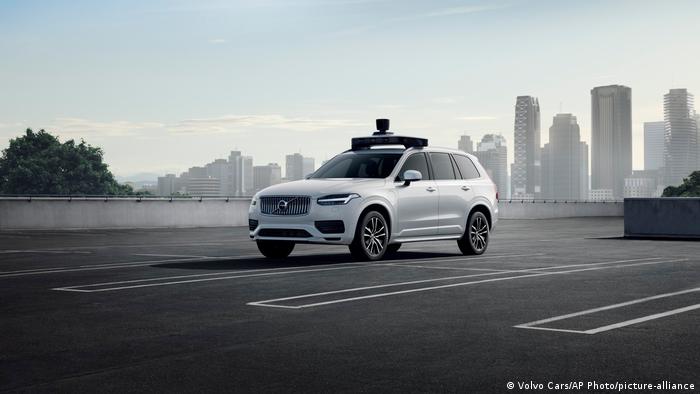 Uber is handing over control of its self-driving cars, and it's not, as they hoped, to the cars themselves.

This week the popular ride-hailing company announced a Silicon Valley startup will be taking over its autonomous car division, Advanced Technologies Group (ATG), following years of effort spent on a project that has cost the company hundreds of millions of dollars and untold legal trouble.

San Francisco-based startup Aurora will purchase ATG from Uber for $4 billion (€3.3 billion) in a deal that is likely to close early next year. Valued at $7.25 billion in the spring of 2019, the discounted sale of its self-driving car division represents both a relief and a setback for Uber. The company is cutting itself loose from a costly project that it had hoped would finally allow it to turn a profit.

Those profits have yet to appear and Uber's troubles mirror a wider trend in an industry that has thus far failed to deliver on big promises.

Man vs. Machine: Who is the safer driver?

Announced in 2015, the Uber project was an attempt to replace the company's biggest expense — its human drivers — with a fleet of robot taxis.

But the ambitious effort has faced one hurdle after the next. An intellectual property battle with Google's self-driving car unit Waymo ended with Uber handing Waymo a $245 million stake in Uber. A former Google employee working for Uber was also handed an 18- month jail sentence for his role in the affair.

A pedestrian fatality caused by one of Uber's self-driving cars then brought road tests of Uber and other autonomous vehicles to a sudden halt. The case drew the attention and ire of traffic regulators, who said traffic and vehicle safety checks were deeply inadequate.

Today, five years after launching the technology and over a year after Uber's $80 billion IPO, driverless cars powered by Uber and others are only on serving customers in extremely limited areas, like in Arizona, where roads are wide and the terrain is flat.

In it for the long haul

Uber's decision to sell the unprofitable unit and the shift of focus away from self-driving taxis raises questions about the short- and mid-term viability of autonomous automobiles.

Other industry developments seem to do so as well. In June, Amazon snapped up self-driving car tech company Zoox for half of what it was valued two years ago, similar to the ATG sale. Driverless truck startup Starsky Robotics closed up shop this year and Ford pushed its plan to launch a self-driving taxi service back to 2022.

But not everyone has gotten discouraged. "I think autonomous driving is like the battery-powered car," Ferdinand Dudenhöffer, director of the Center Automotive Research in Duisburg, Germany, told DW: "It's Tesla who's setting things in motion here."

"The carmakers themselves have been very reluctant in recent years. They said it would be too expensive, and customers would not pay for it," he continued. Tesla founder Elon Musk, on the other hand, has pushed ahead with updates that allowed his vehicles to drive first semi-autonomously and later completely autonomously, he says.

"This is a very fast development, and everyone else will be forced to follow suit."

A closer look indicates that this might indeed be the case. Volkswagen Group (VW) CEO Herbert Diess this week told business magazine Wirtschaftswoche he expects autonomous vehicles to be on the market between 2025 and 2030. The German carmaker last month also said it would boost spending on electric and self-driving cars.

"It is going to be a race with Tesla," Diess said in an investor call in November, explaining how VW intended to focus on software programming to help develop self-driving cars. "They are also ramping up fast."

While the path to autonomous driving hasn't been as smooth as many expected, progress has been consistent. And even Uber isn't completely cutting off its problem child: The company has said it will invest $400 million in Aurora, a deal that will give Uber a 26% stake in the company. Per terms of sale, Aurora plans to launch its first self-driving cars on Uber's network.

With the pandemic making it hard to sell even the human-driven vehicles people are used to, the industry might be forgiven for failing to deliver on revolutionary technologies promised what now feels like a  lifetime ago. Meanwhile, industry leaders will have to keep their hands on the wheel.

Uber bookings plummeted by nearly three-quarters in April, May and June due to the pandemic. Meanwhile, the company's food delivery service reported a 103% jump in revenue as more people stayed at home and ordered food.