Sede vacante - The papal transition | World| Breaking news and perspectives from around the globe | DW | 01.03.2013

Officials in the Vatican have been busy preparing the election of a successor since Benedict XVI announced he would resign. The 'sede vacante' period is subject to a strict code of regulations. 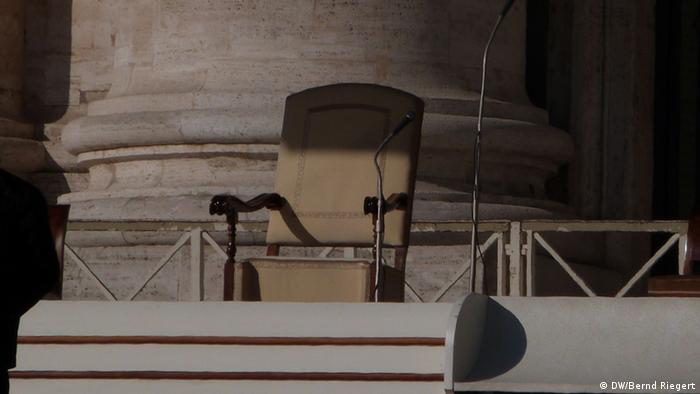 Sede vacante is literally the period of the "empty seat," when the Holy See becomes vacant after the death or resignation of a pope. It is a well-regulated interim period. Following his resignation announcement, Pope Benedict XVIremained in officeuntil the end of February.

As expected, the German pope did not make any spectacular decisions during that period. Such a move would have surprised Stephan Haering, a Munich-based expert on canon law.

"I do not believe he will appoint more cardinals, but he will observe his regular papal duties," Haering told a Munich church radio station shortly after Benedict announced his resignation.

This time, Vatican authorities have more time than usual to prepare for the transition period, the secret conclave and the arrival of 115 cardinals eligible to vote, as well as thousands of reporters.

The Cardinal Camerlengo, currently 78-year-old Tarcisio Bertone, is responsible for managing the property of the Holy See during the interim period between the resignation and the election of a new pope.

Provisions by Code of Canon Law

The papacy is then on hold. It is "an interim order for the span of time between two popes" determined in papal election regulations, Bonn canon lawyer Norbert Lüdecke told DW. Nothing may be changed in the church's overall leadership, he added: not even the smallest change in course, no removals from or appointments to office. Papal power is not delegated to the Pontifical College nor to the College of Cardinals, which prepares and conducts the election of a new pope.

"Apart from that task, it can only handle regular or urgent matters that as a rule are not reserved for the Pope," Lüdecke said.

According to Catholic canon law, a conclave begins in the Sistine Chapel at the earliest 15, and at the latest, 20 days after the death of a Pope. For hundreds of years - as was the case after the death of Pope John Paul II in 2005 - these two to three weeks have been a period reserved for mourning, farewell and the deceased pope's funeral. Benedict's surprise resignation, however, allowed for a completely new and much longer period of speculation and stock taking as well as mental preparation.

The Sistine Chapel, presumably the best-known chapel in the Apostolic Palace, is in for several changes before the Papal Conclave begins; bustling activity, too, in the rooms and corridors of the guest house that will house the electors. At some point, then, the cardinals install themselves in the chapel to elect a successor. Some of them are just shy of 80 - an age that would have barred them from casting their vote in the election.

Previous sede vacantes seem to indicate that a decision on who is to become the 266th Pope can be expected about 17 days after the "empty seat" period began, in this case, on March 17 or 18. The eight papal vacancies the Catholic Church saw in the 20th century lasted an average of 17 days and exactly 17 days before Benedict was elected in 2005.