A New York university's annual list of the 10 most bizarre new species discovered in the animal and plant kingdoms has been topped by a mini spider named after a hat from the "Harry Potter" series. 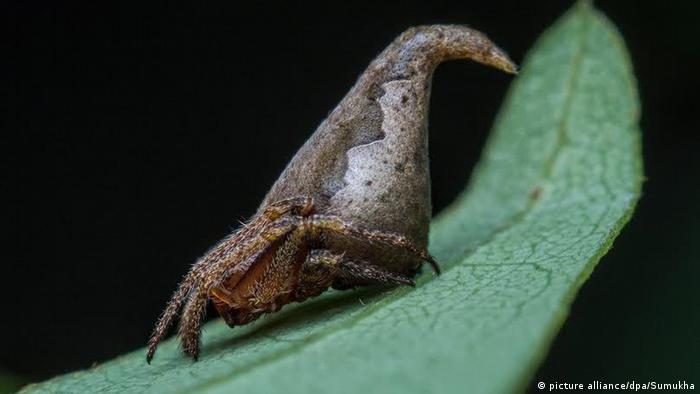 The species on the Top 10 list, compiled by the International Institute for Species Exploration at the State University of New York, came from 10 countries across four continents and were selected from a total of 18,000 newly discovered species.

A tiny spider (pictured above), less than 2 millimeters (a tenth of an inch) in length, was named after the bewitched Sorting Hat in J.K. Rowling's "Harry Potter" book series.

"The shape of the spider's body, conical, with a jaunty bend in the narrow tip, is reminiscent of the hat first owned by the famed wizard Godric Gryffindor," the institute wrote on its website.

The list further includes "a strikingly colored freshwater stingray and two plants - a bush tomato that appears to 'bleed' when it's cut and an orchid with the face of the devil," it added.

Two leggy creatures included on the list "were a millipede with more than 400 legs and an amphibious centipede, along with a marine worm that looks a lot like fried pastry."

The Top 10 (pictured above from top left)

The Top 10 has been published annually since 2008, with researchers looking for diversity in the animal and plant kingdoms and those threatened with extinction.

The institute, according to its website, "is dedicated to the exploration, inventory, and classification of Earth's species, public awareness of the biodiversity crisis, advocacy for the important roles played by taxonomy and natural history museums, the advancement of cyber taxonomy and the application of cyber and digital tools to accelerate and improve comparative morphology, descriptive taxonomy, and phylogenetic classification."

The Top 10 New Species list is released around May 23 each year to coincide with the birthday of Carolus Linnaeus - the "Father of Taxonomy," whose work in the 18th century was the beginning point for modern naming and classification of plants and animals.

A further 10 million animal and plant species - five times more than already known - have yet to be discovered, according to the institute.