Audiences chemically change the air inside cinemas as they respond to a film's dramatic stimuli. Scientists can now read those exhaled molecules and say which movie you're watching and even which kind of scene. 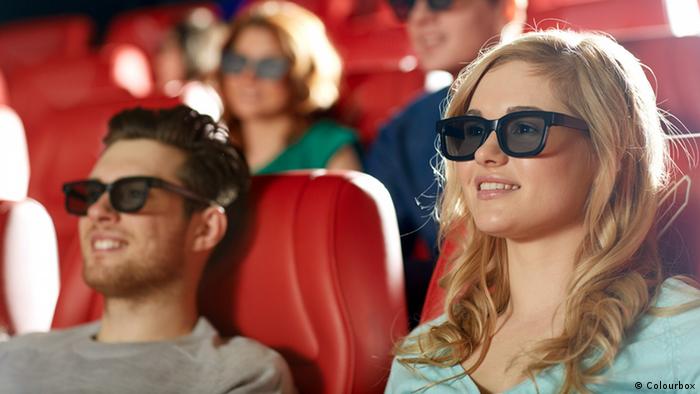 There really is "excitement in the air" when you watch a film inside a cinema, scientists in Germany have shown.

The researchers from Mainz attached air analysis equipment to the ventilation system of a local theater and measured the changing levels of CO2, acetone and isoprene gases inside a screening room.

"We were expecting to see a random mix of leather jackets, perfume, popcorn, fizzy drinks," said the project's leader, Jonathan Williams of the Max Planck Institute for Chemistry. "But we noticed that quite a few peaks appeared in the same place if we showed the film numerous times."

During "Hunger Games: Catching Fire," for example, audience emissions consistently peaked, then troughed, then peaked again at a critical point in the film (vertical lines below). 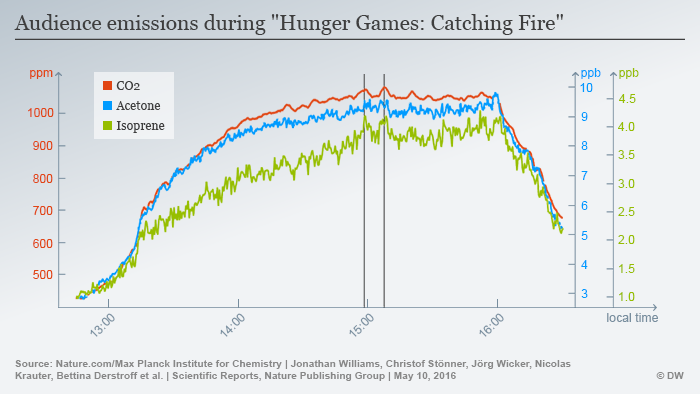 Left peak: Katniss' dress catches fire on stage; right peak: the fighting begins in round two of the Hunger Games

Nearly identical peak-trough-peak patterns occurred during all four screenings of the film in December 2013, allowing the researchers to blindly identify the film just by looking at its unique, air-based fingerprint.

"There's a chemical concert going along in parallel, which happens in the room whenever that film is shown," Williams says.

Suspense can be seen

Williams, an atmospheric scientist, came up with this cinematic "hobby project" after arranging an experiment with the Mainz 05 Bundesliga soccer team. The idea was to measure the emissions of the 30,000 or so fans attending a match to see if human beings exhale a globally relevant cocktail of chemicals. We don't, he says - but there was a second question as well.

"We wanted to see if there was some sort of chemical reaction to a goal being scored. Unfortunately, [Mainz] were not able to score a goal that day. Nor did the opponents. So we didn't get it."

But what if they had? The question kept nagging at the researcher. So he and his team sought out a more controlled environment and came up with the idea of a cinema.

"It's perfect. It's a reaction vessel," Williams said. "You sort of put people into it, you make them laugh, you frighten them. They deliver their reactions by breathing it out into the air, and we just measured it in the back of the cinema." There were no ethical concerns, he added, since cinemas are anonymous and individual breathing cannot be isolated.

The team of researchers measured a total of nearly 10,000 cinemagoers, who together watched 108 screenings of 16 films. These included "Hunger Games: Catching Fire," the children's film "Walking with the Dinosaurs" and a German comedy called "Buddy."

"We were a little bit at the mercy of the films that were shown," Williams said. "We couldn't choose them. They just happened to be these films."

After the screenings, a data mining group at Mainz University processed the raw data through a 287-teraflop supercomputer.

The results allowed researchers to say with varying degrees of accuracy whether a certain kind of scene was being shown based solely on "scene-specific emissions." 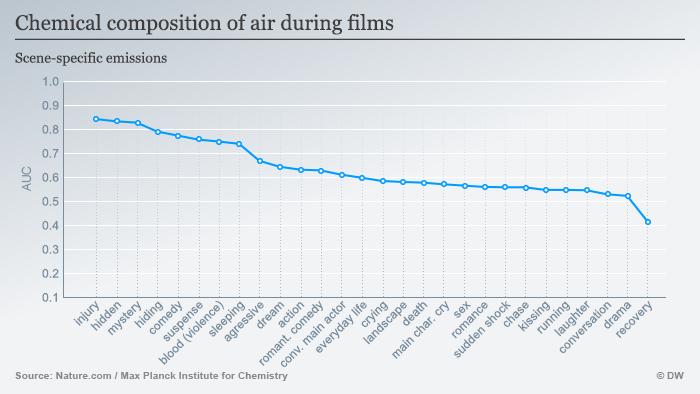 Note that the predictive capacity of these emissions is relevent across multiple screenings of a single film but not across different films.

'The signals are there'

While the study has potential industrial uses, its authors hope the results will be heeded by colleagues in the relatively young field of medicinal breath analysis. Medicinal breath analysis is the attempt to find chemical markers of illness, like cancer or liver disease, by measuring human exhalations. One implication of the cinema study is that a person's emotional state can dramatically alter the molecules exhaled, independent of whether there's an underlying illness.

Isoprene, for example, is exhaled when cholesterol in the body is synthesized. Whenever you move, in other words, you release it - which is also why the gas levels spike when an audience leaves the theater.

But that is just one mechanism for release, and it may not be the only reason isoprene is exhaled while watching a film.

"Is it because you hold your breath? Or are you just frightened? Or are you twitching?" Williams asks. "We don't know that yet. All we've said so far is that the signals are there."

The team in Mainz plans further film studies, with results for "Star Wars: The Force Awakens" expected after the film's DVD release (which they need to accurately correlate emissions with specific moments). In the future, Williams also hopes to target films with clearly identifiable reactive moments.

Williams also plans to further analyze the difference in emissions between adults and children, the latter of whom exhale different molecules due to differences in metabolism.

The full text of the paper can be read online in the scientific journal Nature.

Williams asked to express his gratitude to the CineStar cinema in Mainz for allowing his team of researchers to access its ventilation system and install strange equipment.

A team of German scientists has identified toxins in the bodies of aircraft crew members who believe they've experienced a "fume event" - a technical glitch where toxins from the engine contaminate cabin air. (26.02.2016)

Study: Restrictive laws do not curb number of abortions

Researchers have found that abortion rates in rich countries are at an all-time low, but remained steady for developing countries. The study highlighted the urgent need for wider access to modern contraceptive methods. (12.05.2016)