Scientists: Giant Black Hole at Milky Way′s Center Beyond Doubt | Europe | News and current affairs from around the continent | DW | 15.12.2008

A team of German scientists say they have come across compelling, new proof that a black hole of unimaginable dimensions is at the center of our galaxy. 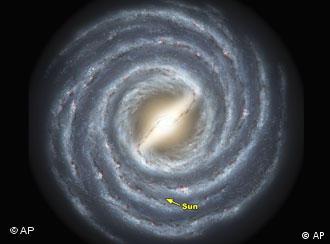 For decades, astronomers have speculated about the possibility of a black hole at the Milky Way's galactic center. But because of the billions of stars which lie between Earth and the hub of the galaxy, it has been impossible to view what was actually there.

Now, German researchers say they have established the existence of an enormous black hole at the galaxy's center "beyond any reasonable doubt," DPA news agency reported on Monday, Dec. 15.

The scientists at the Max-Planck Institute for Extraterrestrial Physics in Garching, near Munich, conducted 16 years of studies on 28 stars circling the center of the Milky Way.

By observing the movements of these stars, the scientists say they were able to determine the characteristics of the object around which they are circling.

"Undoubtedly the most spectacular aspect of our long-term study is that it has delivered what is now considered to be the best empirical evidence that super-massive black holes do really exist," said Max Planck study leader Professor Reinhard Genzel.

"The stellar orbits in the galactic center show that the central mass concentration of 4 million solar masses must be a black hole, beyond any reasonable doubt."

The astronomers were also able to measure with great accuracy how far the Earth is from the center of the galaxy -- a distance of 27,000 light years.

To overcome the age-old problem of penetrating the stellar dust and glare from billions of stars between Earth and the center of the galaxy, the German astronomers focused on infrared light wavelengths that can penetrate the dust clouds.

The galaxy's central mass, long suspected of being a giant black hole, is known as "Sagittarius A star."

The European Southern Observatory study, which began in 1992, was made using the 3.5 meter New Technology Telescope at the La Silla observatory and the Very Large Telescope -- an array of four 8.2-meter telescopes at the Paranal observatory. Both operate from the Atacama desert in Chile.

The research is published in the Astrophysical Journal.

Europe Doesn't Have Sole Claim to the Enlightenment, Says Poet

The West should keep in mind that Islamic civilization reached its peak long before Europe's Enlightenment, says German poet Hans Magnus Enzensberger, adding that isolation is a death sentence for every culture. (14.12.2008)

The European Commission’s decision to change the name of the EU’s Global Monitoring for Environment and Security (GMES) program to reflect the German spelling of “Copernicus” has angered Poles. (11.10.2008)

Three top German art museums have agreed to lend their paintings to Dubai on the shores of the Persian Gulf, where a citadel of high culture is planned using the emirate's vast oil wealth. (29.05.2008)