The "nearly pure ice" could be used for drinking water or producing oxygen or methane for astronauts, scientists say. They discovered the deposits using images from the Mars Reconnaissance Orbiter. 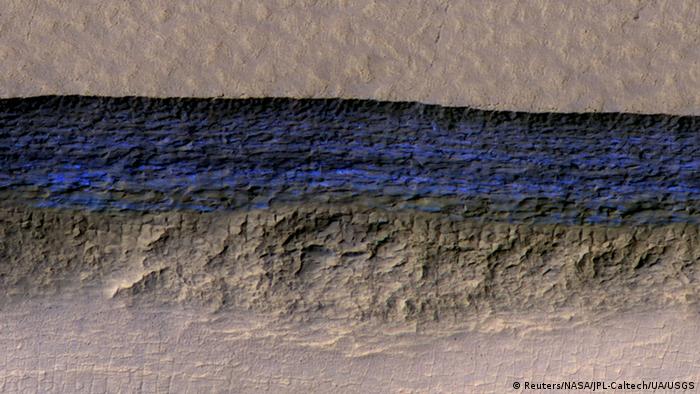 Scientists said Thursday they had detected thick ice deposits on steep slopes near the surface of Mars that could support a future human mission to the planet.

Researchers have long known about shallow ground ice and ice deposits near the Red Planet's poles. But the new report published in US journal Science  shows eight sites where "nearly pure ice" is exposed along steep underground cliffs nearer to the middle of the planet.

The report's authors used images from the Mars Reconnaissance Orbiter (MRO), a NASA spacecraft that has analyzed the Martian atmosphere and surface since 2006.

"It was surprising to find ice exposed at the surface at these places," said Colin Dundas of the US Geological Study, who led the study. "In the mid-latitudes, it's [ice] normally covered by a blanket of dust or regolith [loose bits of rock on top of bedrock]."

The slopes — called "scarps" — were found in the northern and southern hemispheres at latitudes that on Earth would be equivalent to Scotland or the tip of South America.

Researchers said the depth of the ice ranges from a few feet (one meter) below the surface to as deep as 100 meters or more.

The ice contains bands and color variations that indicate it was formed layer by layer.  "Our interpretation is that this is consolidated snow deposited in geologically recent times," Dundas said.

But scientists said it remained unclear how and when exactly the deposits formed, adding that the lack of asteroid craters on the surface suggested they formed relatively recently.

The report said the ice could help future human missions to the Red Planet. Astronauts could use the ice for drinking water or combine it with carbon dioxide in Mars's atmosphere to produce oxygen and methane, a rocket propellant.

"You can go out with a bucket and shovel and just collect as much water as you need," said planetary scientist Shane Byrne, a co-author. "I think it's sort of a game-changer."

Byrne added that the ice's location nearer to the middle of the planet made it far more accessible for any human visitors: "It's also much closer to places humans would probably land as opposed to the polar caps, which are very inhospitable."

But the eight scarps might not serve as good locations for a long-term human settlement as their latitude means they become bitterly dark and cold during the Martian winter.

Leslie Tamppari, an MRO scientist with NASA's Jet Propulsion Laboratory, said a less ambitious mission could give scientists a lot of information about the history of the Martian climate.

"If you had a mission at one of these sites, sampling the layers going down the scarp, you could get a detailed climate history of Mars," she said.

NASA is planning a first human mission to Mars by the 2030s.

Read more: Space settlers will face many challenges. Will the worst be a lack of diversity?