Radar images of Mars' polar regions have suggested the Red Planet is emerging from an ice age. The new evidence - based on a decade of data - shows the ice began its retreat some 370,000 years ago. 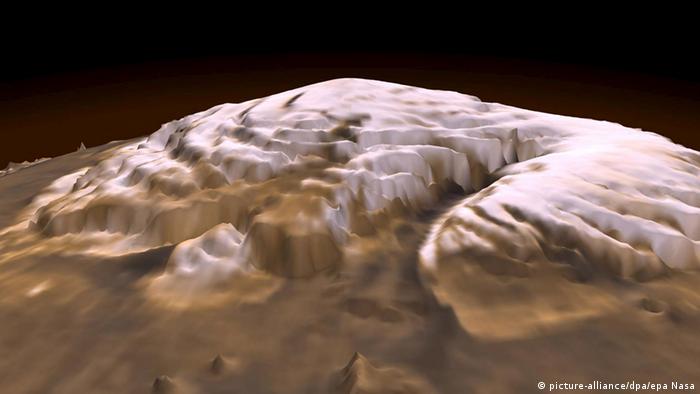 An analysis of radar images that penetrated the polar ice caps of Mars shows that Earth's nearest neighbor is coming out of an ice age that is part of an ongoing cycle of climate change, scientists said on Thursday.

Scientists are keenly interested in piecing together the climate history of Mars, which contains strong evidence that large bodies of water once pooled on its surface, bolstering the prospects for carbon-based life.

From the perspective of an inhabitant on Earth, every day on Mars may feel like an ice age. According to NASA, temperatures on Mars may hit a high at noon at the equator in the summer of roughly 20 degrees Celsius (70 degrees Fahrenheit), or a low of about minus-153 degrees Celsius at the poles.

But unlike Earth, ice ages on Mars occur when its poles are warmer than average and frozen water is more stable at lower latitudes. Transitions between lengthy climate phases can leave tell-tale features in the ice, the research showed.

Scientists can now use the new ice measurements in computer simulations to more accurately model the Martian climate, said planetary scientist Isaac Smith of the Southwest Research Institute in Boulder, Colorado, who led the study.

Smith and colleagues found a maximum ice thickness of 320 meters (1,050 feet) across the polar cap, matching previous models' predictions in 2003 and 2007.

"This suggests that we have indeed identified the record of the most recent Martian glacial period and the regrowth of the polar ice since then," said Smith.

Smith and his colleagues found dramatic slopes in layers of ice within the Martian northern ice cap. Other layers reveal ice flowing in the reverse direction. The climate cycles are triggered by changes in Mars' orbit and tilt, which affect how much sunlight reaches the planet's surface.

The shifts are particularly dramatic on Mars because the planet's tilt changes by as much as 60 degrees, compared to variations in Earth's tilt of about 2 degrees.

The latest findings are based on data collected by NASA's Mars Reconnaissance Orbiter, which has been circling Mars for 10 years.

The European Space Agency-Roscosmos ExoMars spacecraft has sent its first starry test image back to Earth as it makes its way to the Red Planet. And, it’s a sight to behold! (14.04.2016)

US space agency NASA has suspended their next space mission to Mars. The announcement comes after private space flight firm SpaceX successfully launched and landed its first reusable rocket. (23.12.2015)