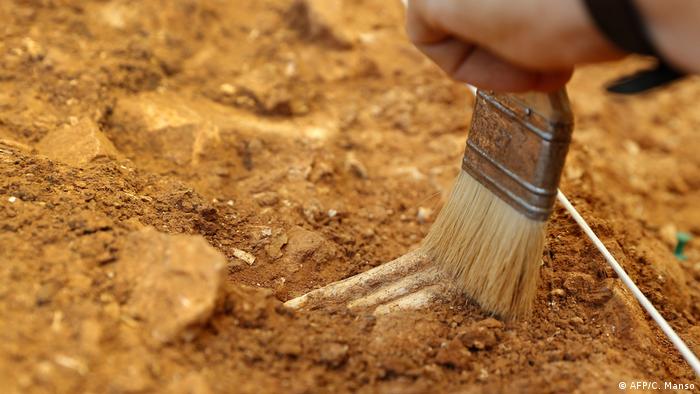 A 70-million-year-old fossil of a 6-meter-long fish that lived among dinosaurs has been discovered in Argentina, a team of paleontologists said on Monday.

In Argentina's southern Patagonia region, researchers "found the remains of a predator fish that was more than six meters long," a carnivorous animal with sharp teeth and a "scary appearance."

The Argentinian paleontologists published their findings in the scientific journal Alcheringa: An Australasian Journal of Palaeontology.

The fossil belonged to the Xiphactinus genus, "amongst the largest predatory fish that existed in the history of Earth," according to the paleontologists.

They described the body of the fish as having been "notably slim" but that it ended in a massive head with large jaws and teeth "as sharp as needles, several centimeters long."

The giant fish "swam in the Patagonian seas at the end of the Cretaceous Period, when the temperature there was much more temperate than now," the study said.

The fossils of the giant fish were found nearby the Colhue Huapial lake, some 1,400 kilometers south of the capital Buenos Aires.

Julieta de Pasqua, one of the authors of the study, said examples of the Xiphactinus have also been discovered in other parts of the world, "some of which even have preserved stomach contents."

Previously, this species of fish had only been found in the northern hemisphere, with only one other example recently uncovered in Venezuela.

Patagonia is considered one of the greatest paleontological centers in the world. It is home to an important reservoir of dinosaur fossils, as well as fossils of other prehistoric sea and land species that are said to have ruled the area around 80 million years ago.

In February last year, paleontologists discovered fossils from a heretofore unknown species of dinosaur in Argentine Patagonia, estimated to have been about nine or 10 meters in length.

The "new" dinosaur belonged to the sauropod group and was notable for its large bony spikes covering its long neck and back. The dinosaur was labeled "Bajadasaurus pronuspinax," referring to the Bajada Colorada geological formation in Neuquen province, western Argentina, where the remains of the animal that lived approximately 140 million years ago were found.

Paleontologist Pablo Gallina described Bajadasaurus as a member of the dicraeosaurid family within the larger sauropod group.

Fossils found in a Bulgarian cave show that Homo sapiens may have swept into Europe 46,000 years ago. This indicates a longer overlap with Neanderthals and suggests major cultural links between the two. (12.05.2020)