Less than half a gram of bone has been used to decode a large portion of the genome of Neanderthal man, an extinct evolutionary relative to modern humans, scientists announced Thursday, Feb. 12. 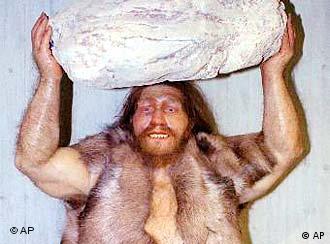 The genome project was orchestrated by two teams, one from the Max Planck Institute for Evolutionary Anthropology in Leipzig and the other from US genome-sequencing firm 454 Life Sciences.

Speaking at one of two simultaneous press conferences on the project's results, head scientist Svante Paabo said the two teams had sequenced more than three billion sections, or 60 percent, of Neanderthal DNA.

Initial analysis of the results has confirmed the teams' belief that Neanderthals, humanity's closest known relative, contributed very little to the gene pool of modern humans.

"Our data really shows if there was a contribution, it was very small. It's tiny," Paabo said.

He acknowledged, however, that a breakdown of the sequencing had so far confirmed that humans and Neanderthals shared the same variant of the FOXP2 gene known to play a role in speech.

"We cannot say from this they could speak. We can just say there is no reason to assume they couldn't speak from what little we know," Paabo said.

The teams used bones from Neanderthal skeletons found in Croatia, Spain, Russia and Germany. Paabo said the next step would be to compare the newly discovered genome with that of modern humans. 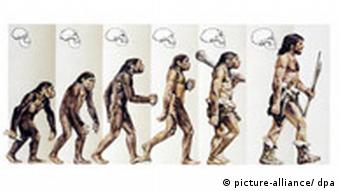 Neanderthal man is part of the human evolutionary story

Neanderthals lived in Europe and parts of Asia until about 30,000 years ago, when Cro-Magnon people, an ancestor of modern humans, began migrating into their territories.

The goal of the project is to identify areas in the genome where humans have undergone rapid evolution since the split from Neanderthals: the genetic changes that define us as human, 454 said Thursday in a statement on its Web site.

This analysis is achieved by comparing the Neanderthal reference to the human and chimpanzee reference genome sequences as well as to the genomic variation among humans today, the statement said.

"Using the chimpanzee and human mitochondrial DNA sequences (mtDNAs) as reference points … the divergence date between human and Neanderthal mtDNAs is at 660,000 (plus or minus) 140,000 years," the statement said. 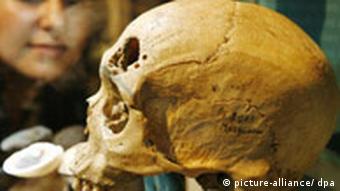 According to one theory, Neanderthals were unable to adapt to a changing environment

In Bonn, Germany, Neanderthal specialist Ralf Schmitz said he expected these studies to reveal within 10 years how the two species were related. He said the Neanderthal genome "has been read, but not yet decoded."

Schmitz heads a team that is studying the original Neanderthal bones discovered in 1856 in the Neander gorge near Duesseldorf in Germany which led to the species' name. There is a museum at the site today.

He said he also expected key data on Neanderthal metabolism using the DNA data "within five to 10 years." This might explain why the Neanderthals became extinct 30,000 years ago. One theory suggests they could not adapt to changes in food supplies and types in times of famine.

Schmitz said genetic studies had not yet been conducted on a female Neanderthal he discovered in 1997 at the Neander site. "She's still in a holding pattern," he said.

A team of German scientists say they have come across compelling, new proof that a black hole of unimaginable dimensions is at the center of our galaxy. (15.12.2008)

Researchers in Dresden have made a breakthrough in the search for a effective tool against Alzheimer's disease, although it may not be ready for human use for another decade. (24.04.2008)