Two long-tailed macaques have become the first primates to be cloned using the same process that produced Dolly the sheep. The breakthrough by Chinese scientists could open the door for copying humans in the future. 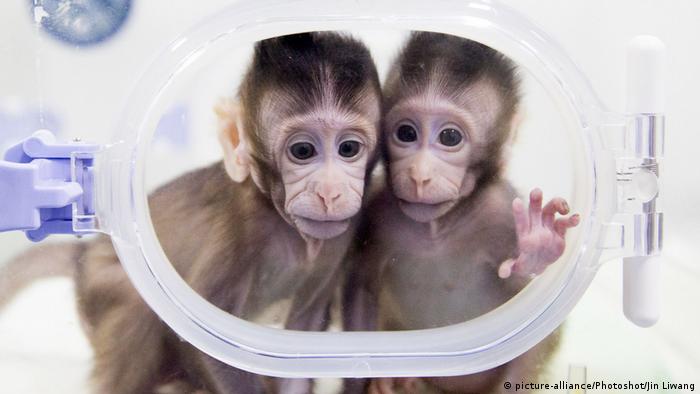 Two identical baby macaques named Zhong Zhong and Hua Hua are the first ever primates to be cloned from a non-embryonic cell, researchers in China announced on Wednesday.

The baby monkeys, born six and eight weeks ago, were cloned using a process called somatic cell nuclear transfer (SCNT), according to research published in the scientific journal Cell. It is the same process that was used to clone Dolly the sheep over 20 years ago.

Although SCNT had been used to clone over 20 different animal species, primates — a mammal order that includes humans — have been more difficult.

Read more: The Colombian monkeys that could save themselves and their habitat

"The barrier has been broken by this work," Muming Poo, director of the Institute of Neuroscience at the Chinese Academy of Sciences in Shanghai told news agency AFP.

The researchers said their work will greatly help medical researchers by making it possible to clone genetically uniform monkeys for studying diseases and medical trials. They are frequently used in research on cancer, brain diseases like Parkinson's, as well as immune disorders.

"In the United States alone they are importing 30,000 to 40,000 monkeys each year by drug companies," Poo told AFP, adding that having cloned monkeys would reduce the number needed for drug tests.

The technical feat also brings scientists a step closer to cloning humans, as well, raising a host of ethical concerns.

Although researchers were able to produce two clones using SCNT, their success rate was very low. Out of 127 eggs, only two produced live macaque births.

The SCNT method involves transferring the nucleus of a cell, which includes its DNA, into an egg which has had its nucleus removed. In order to clone primates using this method, fetal cells — rather than adult ones like those used to clone Dolly — were the only ones that proved successful.

"It remains a very inefficient and hazardous procedure," said Robin Lovell-Badge, group leader at the Francis Crick Institute in London, who was not involved in the Chinese work.

"The work in this paper is not a stepping-stone to establishing methods for obtaining live born human clones. This clearly remains a very foolish thing to attempt," he added.

Scientists at the Shanghai institute urged that their method was not intended to be applied to humans. They also called for a debate on what should and should not be considered acceptable practice in cloning primates.

Monkeys have been successfully cloned in the past using a different technique called embryo splitting. The technique mimics how twins naturally occur, but it can produce only four at a time, whereas the SCNT method could, in theory, clone many more.

Biochips instead of animal testing