Trade union leaders and conservatives may be irritated by excerpts from the former chancellor's memoirs, but the German press says by and large there's little to get excited about. 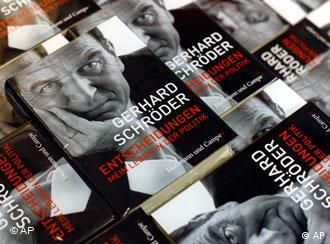 When Gerhard Schröder officially launches his 544-page volume of memoirs, entitled Decisions: My Life in Politics, at the Social Democrats' Berlin headquarters on Thursday, he'll be introduced by Luxembourg's Prime Minister Jean-Claude Juncker. The choice of a foreign leader -- and a conservative -- for this role speaks volumes about the former chancellor's uneasy relationship with the party he used to lead. And to judge from initial reactions to what he's written, Decisions is unlikely to make him many new friends.

As the PR machine gears up to promote the book, union leaders and some conservative politicians have taken exception to some of Schröder's opinions. But critics say Decisions merely reinforces Schröder's previous image as a pragmatic, media-savvy strategist who lacked grand visions -- and whose tendency toward arrogance led to his political defeat.

Enemies on the left and the right 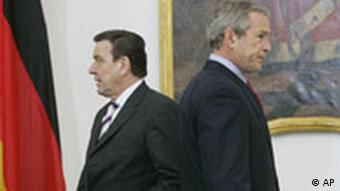 Schröder's most popular decision was against the Iraq War

In excerpts from the book, pre-published simultaneously in Germany's most respected weekly news magazine and its largest tabloid daily, Schröder said resistance from unions to his Agenda 2010 reform program helped doom his re-election campaign in 2005. Predictably, that hasn't sat well with the Social Democrats' traditional political allies on the left.

"Gerhard Schröder should note the fact that he lost 10 elections with his policies," Sommer said. "That's why he's no longer chancellor."

Meanwhile, conservatives are piqued at remarks Schröder made in interviews, in which he criticized his successor in office, the Christian Democratic Union's Angela Merkel, for showing weak leadership.

"I think the criticism is wrong and also ignoble of him," retorted the conservative state premier of Baden-Württemberg, Günther Oettinger. "We had plenty of his authoritarian style and it didn't produce any results."

Given the wide-spread opposition in Germany to the American-led war in Iraq, the most popular parts of the book will probably be those in which Schröder criticizes US President George W. Bush's religiosity. Schröder's decision not to support the Iraq War is indeed likely to go down as his most positively viewed political legacy.

Yawns from the German press 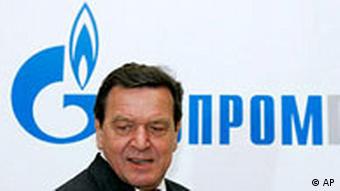 Schröder now has a lucrative post with a Russian gas giant

For the most part, the German media, including a number of regional newspapers, aren't buying the hype surrounding Decisions. The daily Kieler Nachrichten commented, "Much of this is trivial, the self-reflections of an aging man who is having difficulty dealing with the loss of power."

The Westfälischer Anzeiger concurred: "A man of power, who was already thoroughly vain during his time in office, has shed some lucrative tears over a purportedly better era. That can be informative and entertaining, but it's no reason to get angry or mourn along with him."

Hanover's Neue Presse drew a parallel between the shortcomings of Schröder memoirs and his failings as chancellor. "He's certainly allowed to settle some old accounts. But if he had anything wise to say about the future direction of the republic, he'd still be in power."

The Neue Osnabrücker Zeitung agreed: "Schröder failed because of his own flaws and what he neglected to do. He squandered years in office with pragmatic, but directionless politics."

Schröder wrote his memoirs in less than a year, record time for an ex-chancellor, and while the consensus may be that they generate little heat and even less light, he's unlikely to be too bothered. The German branch of the on-line bookseller Amazon says Schröder's Decisions currently tops its list of advance-ordered books.

"Divine Guidance Has no Place in Western Politics"

Gerhard Schröder is publishing his memoirs this week and many DW readers agreed with the former German chancellor's criticism of US President Bush's religious approach to politics. (23.10.2006)

The German government and the country's trade unions are accusing each other of hindering the reform process. A truce seems unlikely with the cabinet set to approve parts of a highly controversial health bill this week. (23.10.2006)

Ahead of the release of his memoirs, Gerhard Schröder says George Bush left a positive impression on him, but the US leader's constant references to God troubled him. Schröder had few kind words for his own successor. (22.10.2006)