Germany′s Government and Unions Clash Over Reform Process | Germany| News and in-depth reporting from Berlin and beyond | DW | 23.10.2006

The German government and the country's trade unions are accusing each other of hindering the reform process. A truce seems unlikely with the cabinet set to approve parts of a highly controversial health bill this week. 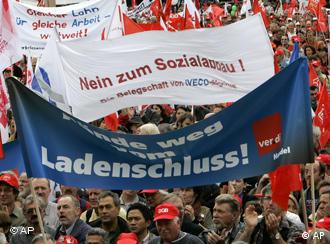 Germany's trade unions mobilized their members to protest this weekend

The mass demonstrations organized by Germany's powerful trade unions this weekend saw an estimated 200,000 people take to the streets in protest of the grand coalition's social and economic policies.

In big cities across the country, workers' representatives vented their anger over what they felt was a lop-sided reform process that was hurting the poor and sparing the affluent. The mass rallies provoked angry reactions especially by senior conservative members of the ruling coalition of Social and Christian Democrats.

They claimed the unions had no right to take to the streets, as they had not made a single reasonable alternative proposal for reforms. Markus Söder from the conservative Christian Social Union, the Christian Democratic Union's Bavarian sister party, was one of those who didn’t mince his words.

"We'd have expected the trade unions to be jubilant in the face of a considerable drop in unemployment in the first year of the grand coalition's work," he said. "But all we hear from them is a constant moaning and groaning. I believe that the unions' leadership is arch-conservative and that we cannot move the country forward together with them. In my view the unions for us are no longer a serious partner at the negotiating table." 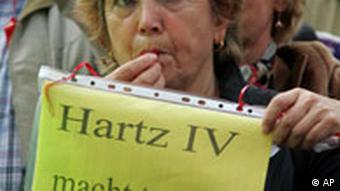 The government is accused of abandoning the people

Michael Sommer, head of the German confederation of trade unions, dismissed Söder's remarks as appalling and totally unfounded. But even prominent members of the Social Democrat party, which traditionally has a working class electorate, said the trade unions are being obstructive. 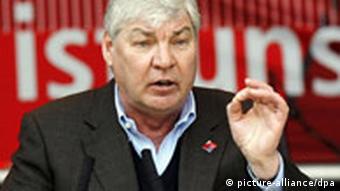 Sommer refuted claims that the unions were at fault

Former chancellor Gerhard Schröder revealed in his autobiography this week that the trade unions had no small share in making him give up his post in 2005. But Sommer rejects the accusations saying it's not the trade unions that stand in the way of the country's development.

"A real risk for the country’s development are those companies which are doing well and are pocketing huge profits, but decide to lay off workers at the same time," Sommer said. "Be it the Siemens electronics giant, the Allianz insurance group or similar companies -- they've all forgotten how to act in a socially responsible way, and we're not willing to accept that.

"And as far as ex-chancellor Gerhard Schröder's criticism is concerned -- yes, we were against his agenda 2010 reform package because of the inherent social injustices. But he cannot really hold it against us that his party lost in elections."

Meanwhile, the head of the German chambers of industry and commerce, Ludwig Georg Braun, has warned that the slow reform process in the country was making more and more people turn their backs on Germany and seek employment opportunities elsewhere.

According to a recent survey, about 154,000 Germans left the country in 2005 alone -- the highest number recorded in over 50 years. Braun indicated that more than half of the emigrants were under 35 years of age, many of unable to find low-skill employment in Germany and argued that Germany needed an improved education policy and a drastic reduction in taxes and social fees to keep these people in the country.

Against a backdrop of party infighting and falling approval ratings, the governing Christian Democrats have begun debating the party's platform and its future. (23.08.2006)