Wolfgang Schäuble won't rule out a Greek debt default as Athens negotiates with its creditors, US and French newspapers report. Greek Finance Minister Yanis Varoufakis has accused his German counterpart of a power trip. 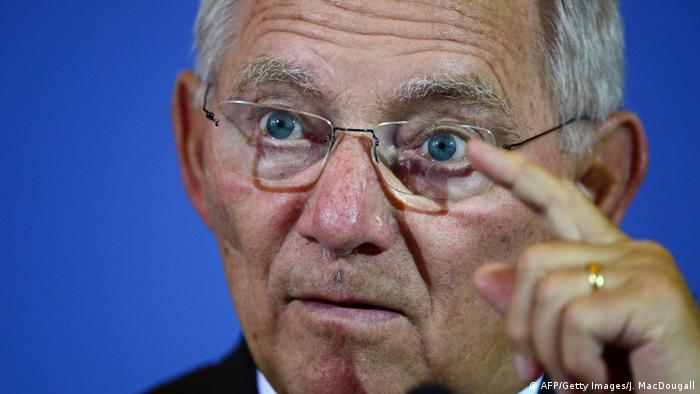 German Finance Minister Wolfgang Schäuble appeared to backtrack on an assurance he gave in 2012 that Greece would not default. "I would have to think very hard before repeating this in the current situation," Schäuble told France's Les Echos and the US Wall Street Journal Wednesday. Led by Germany, the European Union and International Monetary Fund have demanded further austerity from Greece for a final loan installment of 7.2 billion euros ($8 billion).

"The sovereign, democratic decision of the Greek people has left us in a very different situation," Schäuble said of January's election of the Syriza government following years of austerity. "Greece has yet to complete the program," Schäuble said of the foreign-imposed financial plan.

The German finance minister also said he would talk with UK officials about rewriting the rules of Britain's EU membership. Schäuble said he invited the right-wing chancellor of the Exchequer, George Osborne, to discuss reform proposals on EU treaties, including Germany's wish for more centralized fiscal governance of the euro currency, which the United Kingdom does not use. "We have a huge interest in the UK remaining a strong and engaged member of the European Union," Schäuble said.

Greek Finance Minister Yanis Varoufakis told the centrist German newspaper Die Zeit that Schäuble was making a mistake by not considering more possibilities than staying the course on austerity in spite of its consequences for Greeks. "There is some frustration at not having the opportunity to discuss in a different setting, to stage these meetings in a proper federal, democratic context in which arguments, rather than relative power, would play a more prominent role," Varoufakis reportedly told Die Zeit. The finance minister - who has lived in the United States, UK and Australia - posted an English transcript of the interview to his blog after he accused German media of distorting his words in translation.

"He associates past Greek governments with the Greek people - as if the former reflect the character of the latter," Varoufakis said. "And he does not appreciate how helpful it would be for mainstream Northern Europe to find a modus vivendi with a movement (like Syriza in Greece) which may be very critical of European institutions but which is profoundly pro-European and eager to help bring Europe closer together."

On Wednesday a Syriza spokesman said Greece could not make a payment to the International Monetary Fund next month without more aid from foreign lenders. Greece must pay out over 300 million euros on June 5.

Varoufakis told Britain's Channel 4 news that, if forced to choose, Greece would pay public sector salaries and pensions before giving money to the international creditors who have lent the country about 240 million euros since 2010. However, he has also said that he expected an agreement on the next payment within the week.

As German officials have sought to impose increasing austerity on Greece, the Syriza government has in turn demanded reparations for Nazi atrocities during World War II.

Donald Trump teases a presidential run in 2024 3h ago

Iran turns down nuclear talks with US 4h ago