Populist right-wing party the AfD have been elevated to new heights in eastern Germany. The state parliament vice-presidency represents their highest office in the country. 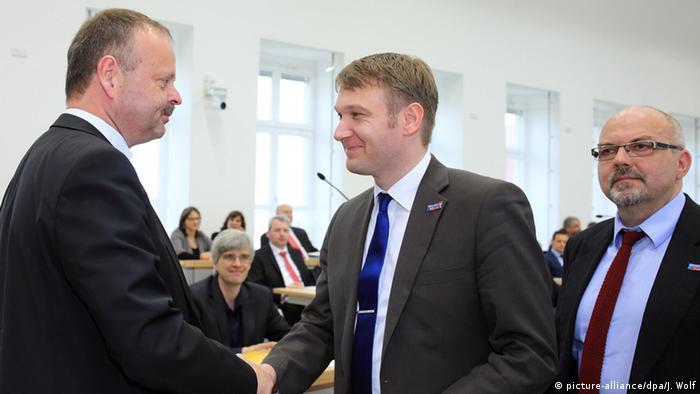 "The result was really a surprise," said new parliamentary Vice President Daniel Rausch (above right). This is the highest political office ever achieved for the anti-migrant party, which was founded in 2013.

Many had expected Left party lawmaker Wulf Gallert (above left) to win an outright majority in the first round of voting. When he failed to garner the necessary votes, Gallert managed to scrape into the next round, putting him on the same level as Rausch but only after a humiliating defeat.

This marks the second time in a month that the AfD has provided a stumbling block to established parties in Saxony-Anhalt. The party first upset the apple cart in by coming second to the center-right Christian Democrats (CDU) in the state election on March 13.

This cut the support for the center-left Social Democrats (SPD), preventing the two mainstream parties from reforming the grand coalition with which they had ruled Saxony-Anhalt for the previous four years. 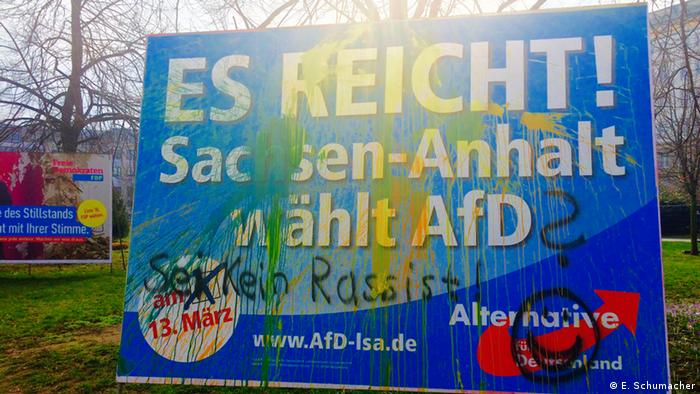 As the AfD continued to court controversy with its nationalistic rhetoric, Chancellor Angela Merkel's CDU formed a government with a CDU-SPD-Green coalition - the first of its kind in German history.

Rausch was not elected solely by the other AfD members in the 87-member legislature. With 46 votes putting him in office, Rausch received 21 votes from members of other parties.

The leader of the CDU in Saxony-Anhalt's parliament also indirectly voiced his consternation over the vote, saying "this has been a totally democratic act. We honor the office, not the person."

The AfD plays on voters' fears, and this is how it is winning votes, says Alexander Häusler, a researcher of right-wing extremism. This is confirmed by a draft of a new party manifesto. (04.04.2016)

Frauke Petry, leader of the Alternative for Germany, caters to the population's concerns about uncontrolled mass immigration. She says there is no correlation between her policies and anti-migration violence in Germany. (23.03.2016)

As the populists move into the ideological vacuum left open by the less and less conservative CDU, the consequences can be felt across the east of Germany. DW's Elizabeth Schumacher reports from Magdeburg. (09.03.2016)